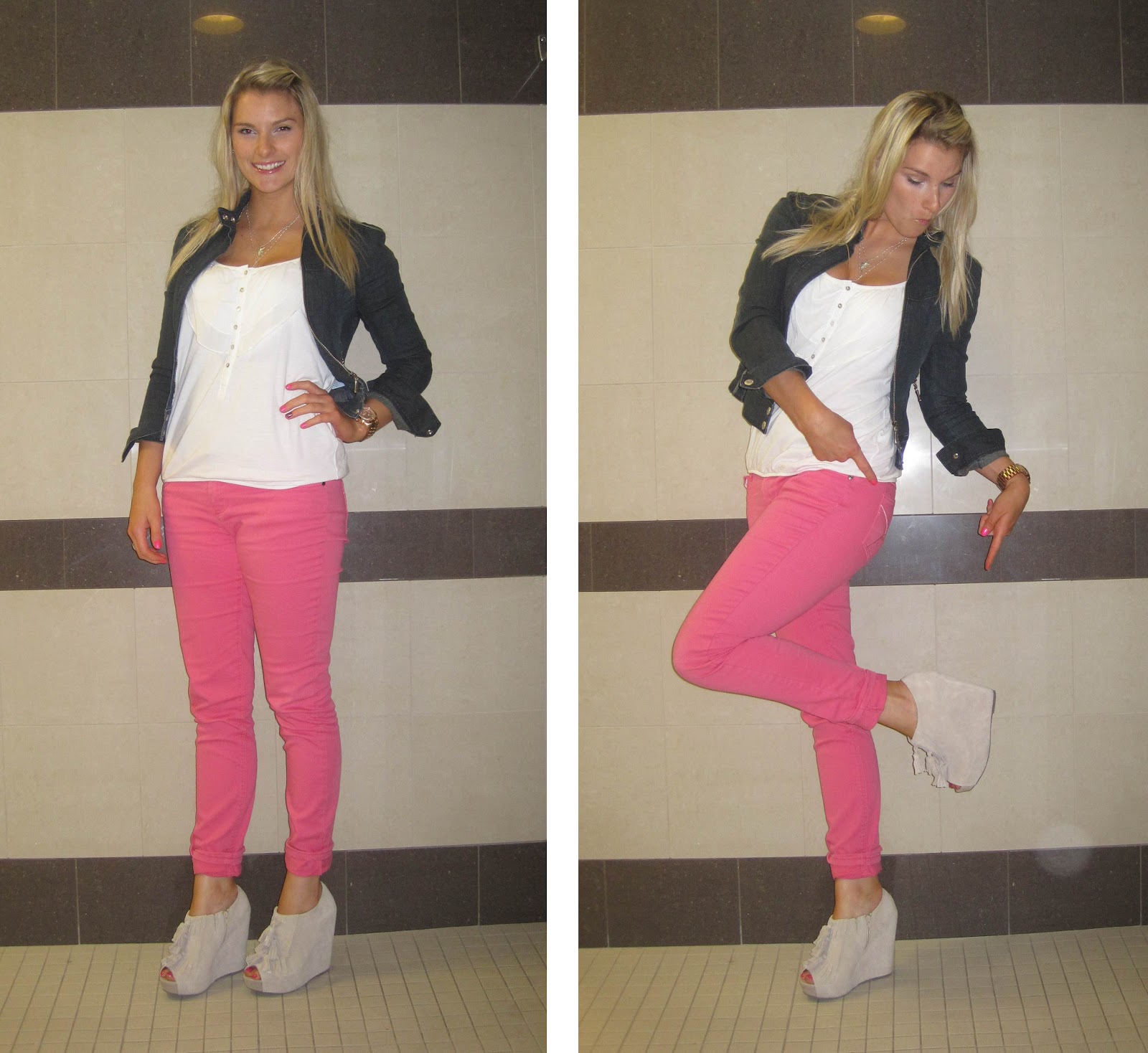 * H&M henley bubble tank that I’ve had for a year.

* Bongo pink pants which are becoming a wardrobe staple (funny  how that happens since I was so apprehensive about wearing them at first) and last seen with a khaki denim jacket and polka dots and a sock bun.

* Le Chateau wedges (new!) that have tassels on ’em.


An frequently asked question but one that’s response can be so hard to put into words.

I
have had trouble expressing how I feel in the past; not wanting to hurt
someone’s feelings or give them the wrong impression, so I go along
with whatever it is they want (I’m talking minor things here people,
like weekend plans).  I was always nervous to say how I really felt in
fear it would come across the wrong way or they would perceive it
incorrectly.  A problem that most people who know me intimately might
not think I have.  You see, I have been described as outgoing, friendly,
loud, bossy, someone with a strong-personality… confident.  You
wouldn’t think someone with those traits, those qualities, would have a hard time speaking their mind.

And sometimes I don’t.  Sometimes I speak my mind very clearly.

But
sometimes it is much harder.  Sometimes I fall into the ‘yes-trap’ and
have a hard time saying no.  Sometimes I accept invitations, plans,
ideas when I really don’t want to.  And hey, sometimes it’s great to
compromise, but when you find yourself saying yes when you really want
to say no more often than not, that’s when a change is due.

About a year ago, a friend recommended a book to me: ‘The Disease to Please‘
by Harriet B. Braiker (a Doctor) and within the first 20 pages, I was
totally doing the, ‘Yes, this is so me.  I’m so this type of people
pleaser!’.  There are three types of ‘pleasers’ in the book and your
type is established through a series of mini-questions and surveys.
It’s shocking how accurate it is.

I didn’t end up finishing the book, just got busy with other stuff,
but I really feel like the first quarter of the book already fed me so
much.  Already fulfilled me so much.  It was a little bit eye-opening
and surprising too.

I have been working on saying no over the past year.  This has to do
with people-pleasing; always wanting to say yes to please others.  It’s
not easy, but over time it gets easier.  I read a fantastic quote
though, about a month ago, “Learning to say no can be very difficult at
first because the people
around you that have been interacting with you have become used to you
saying yes.  The other person may get angry, and then you have to know
that their anger has nothing to do with you.  It has to do with them.
Just remember to say to yourself: When I say no to you, I’m saying yes
to me.“

Isn’t that so true?