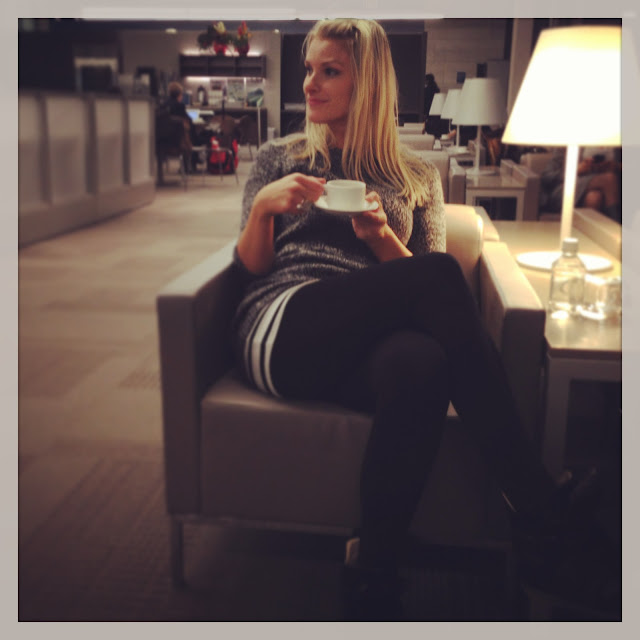 Three days before I left for Mexico, I went to Toronto with my bestest girl to take in Fashion Week.  Maybelline hosted us, as we had entered a contest and they picked Sarah’s name, and we truly lived like Queens for the two days we were there.

I have a ton of photos to share with you, so I’m breaking it up into two parts.  Click the link after the jump to read on. 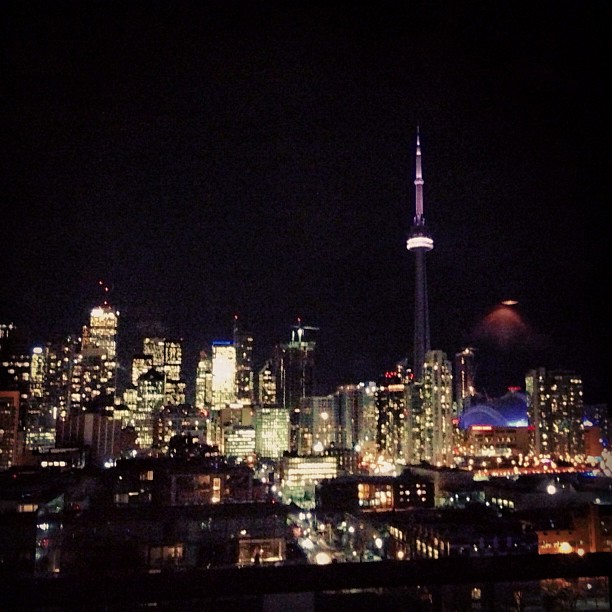 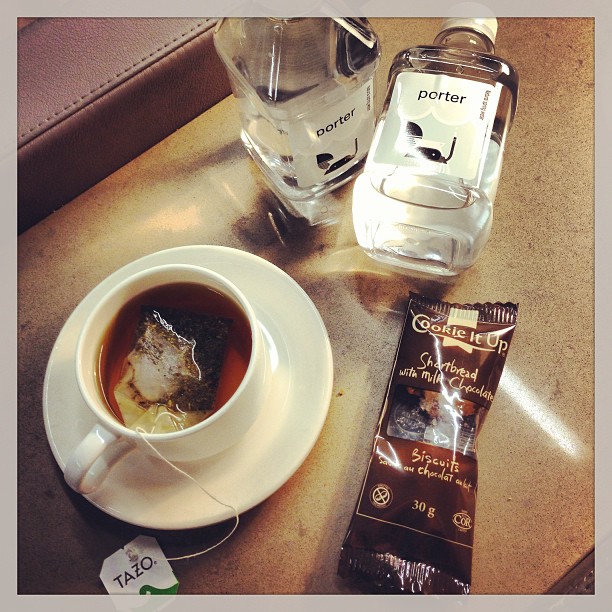 We flew Porter which was really nice (as nice as flying can be).  I had never flown with them before and it was extra nice to use the Porter lounge at the airport for their free wi-fi, comfy chairs, tea and snacks–omg those cookies were delicious. 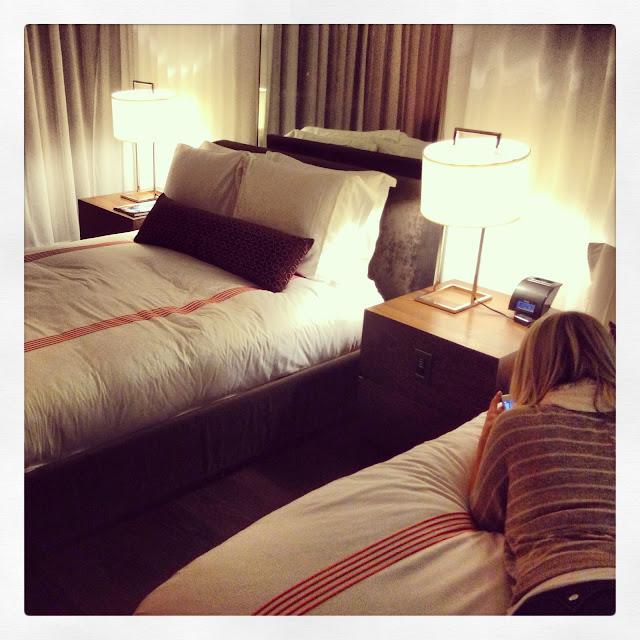 Upon arrival in Toronto, a chauffeur picked us up (fancy!) and took us to our hotel, The Thompson. The hotel was beautiful and incredibly modern and we found out later that it’s also a condo building where people own some of the units. When we walked into the large, dark lobby, the DJ was spinning loud house-like music in the lounge off the lobby. We went up to check out our room, dropped our bags, freshened up and headed down to the lobby for some drinks. 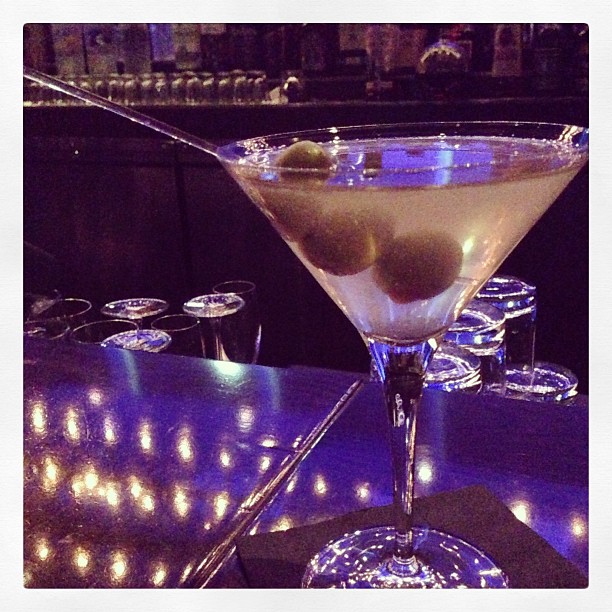 We drank and chatted and met some people who were hanging out and had a great time.  We had worked that day and had been up early so we called it a night around 2am, I think, and headed to bed. 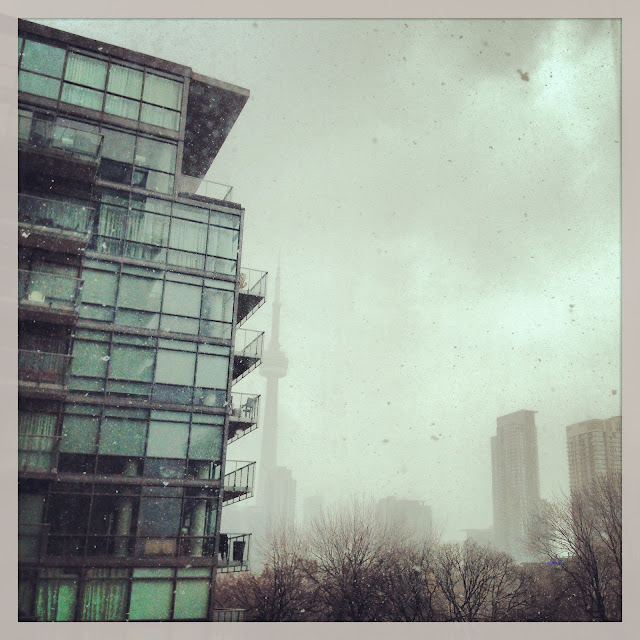 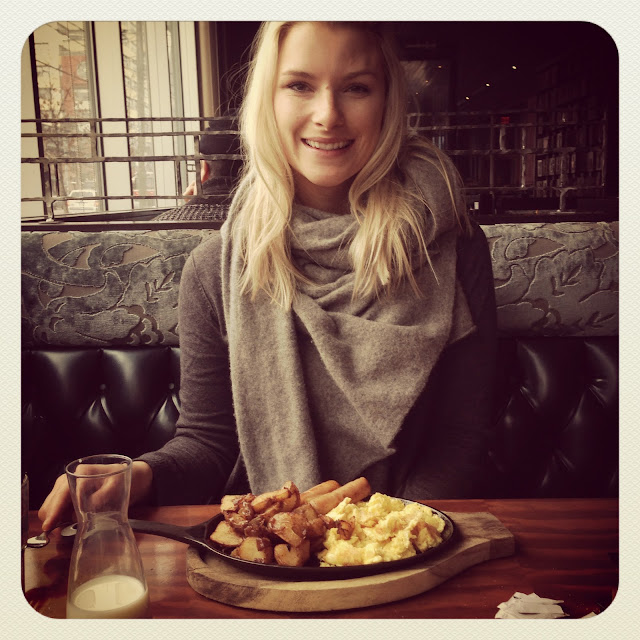 The next morning we woke up to snow, threw on some casual clothes and went down to the Diner within the hotel for breakfast.  It was a busy, buzzing spot and the food was hot and tasty.  We had been given our itinerary and knew we had a few hours to kill before heading to the tents so decided to walk about 2km’s to the nearest H&M and get our shop on. 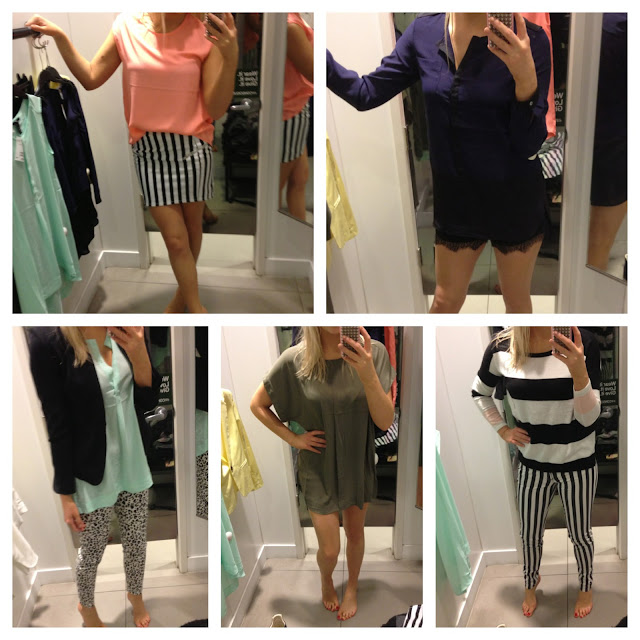 I ended up getting the striped skirt, snow-leopard skinny pants & black blazer (all shown).  I kind of wish I had picked up that mint hi-low top too, but oh well. 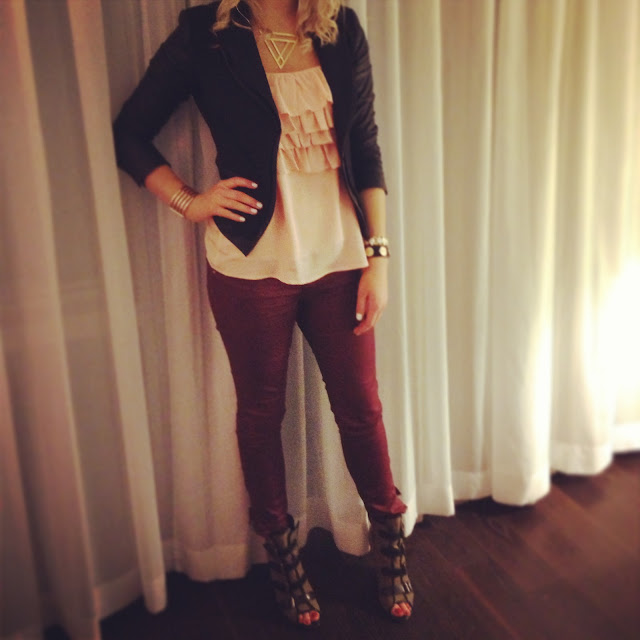 Then it was back to our hotel for a super speedy shower, dress and run out the door to get to the tent at Fashion Week.  This picture above is showing my outfit but was actually taken at the end of the night when my hair and make-up was done. 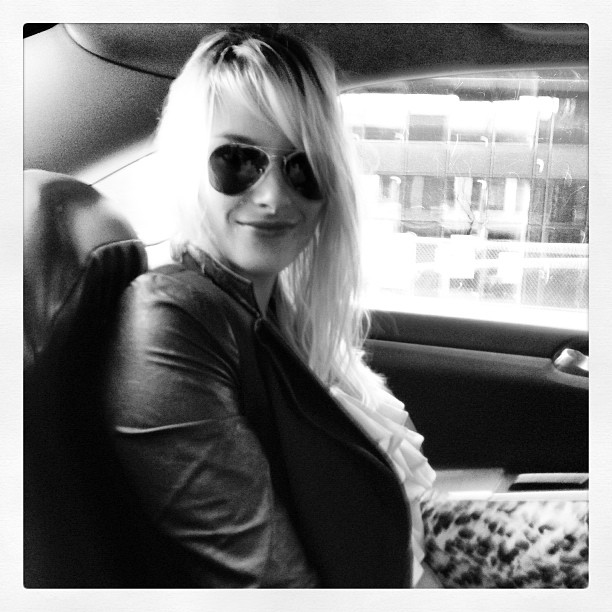 We hoped in a cab and both wore sunglasses as we didn’t have a speck of make-up on.  Our hair was still damp from our showers but that would soon be fixed. 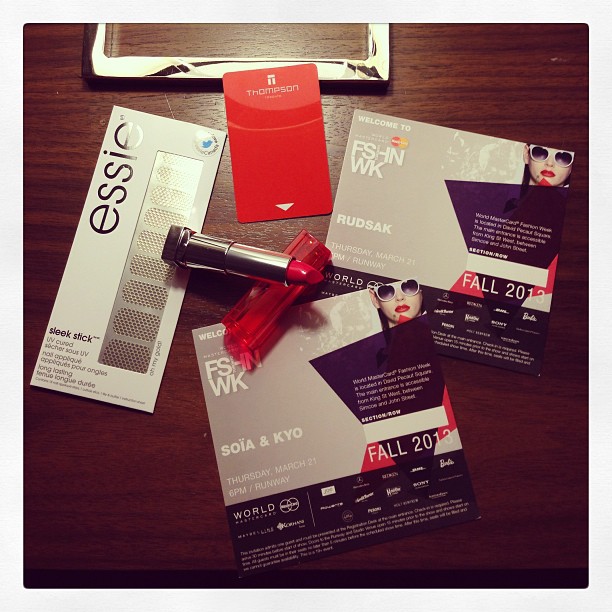 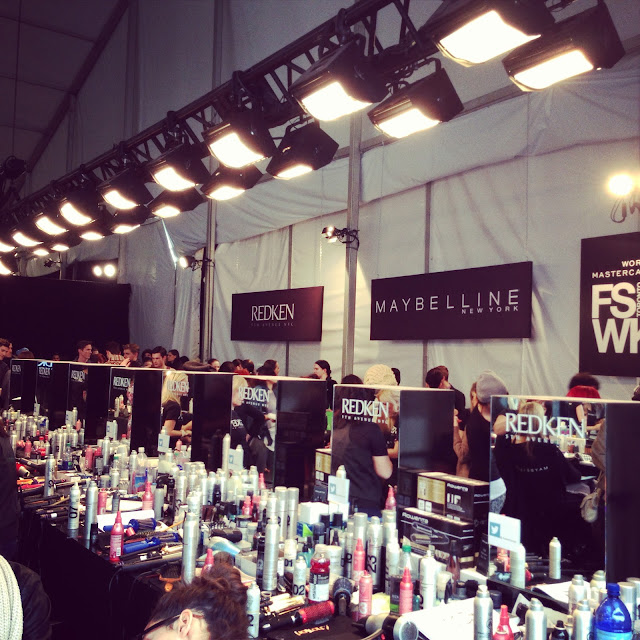 Once we arrived, we were escorted backstage to where all the action was happening.  Everything was Maybelline and Redken and people were buzzing about, fixing up the models, yelling out how much time was left and photographers snapping pictures.  It was mayhem! 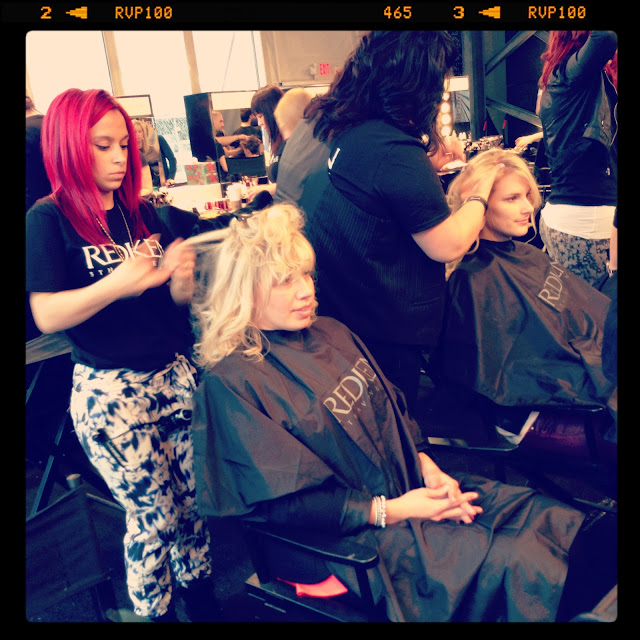 We were then sat in two chairs and asked what we wanted for our hair and the girls got to work on us!  Typically two hair stylists per person, handing the main stylist their hot tools, products, brushes, etc., somewhat like an assistant. 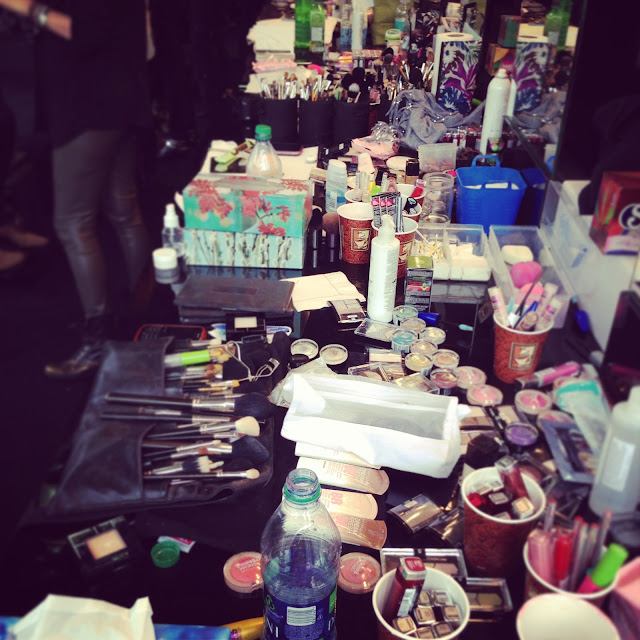 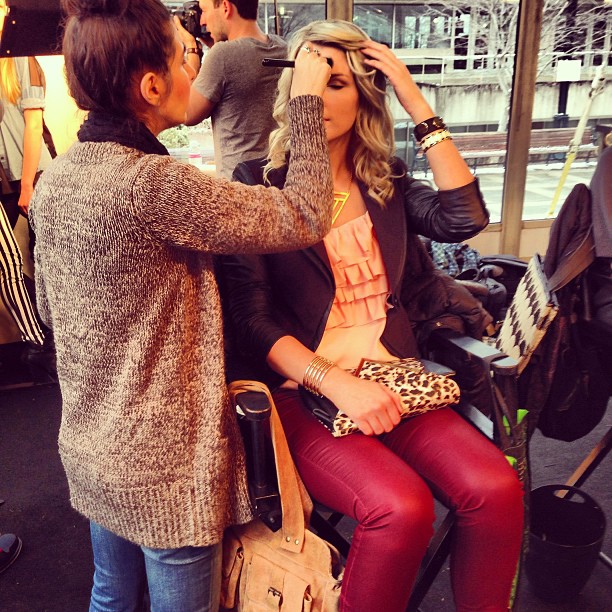 Then it was onto make-up.  The show was literally starting in 10 minutes when I finally sat down and my girl went to put blush on my bare (and uneven) skin when I said, ‘Um, you’re going to do foundation and concealer, right?  Please?‘ (please!)  She was shocked because we were so short on time but seriously, we don’t need to be adding more redness…I mean blush, to my skin without foundation.  #aintnobodygottimeforthat 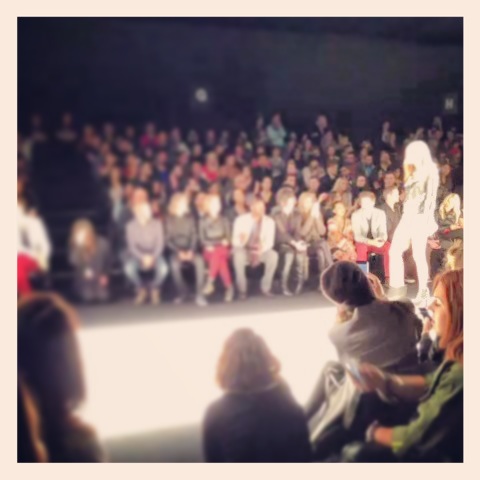 We were then rushed out to our seats moments before the show started.  We sat in the third row and watched the Soia & Kyo show first.  It was beautiful and upbeat.  It was certainly enjoyable to watch.  Then we headed backstage for a bit, then were escorted back out for the Rudsak show which was equally as entertaining with such beautiful pieces (tons of fur, leather and mixed materials). 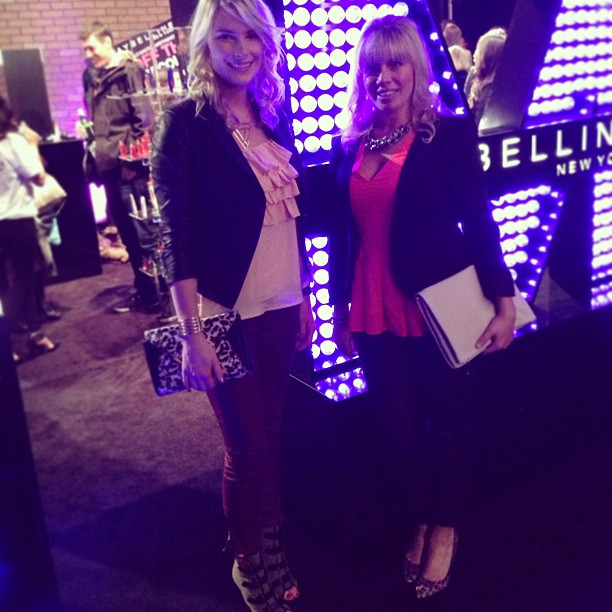 Between the shows there was a common area where vendors and brands were set up with booths where you could, for instance, get a manicure or your make-up done, take pictures, get free samples, a bar to get drinks, and so on. 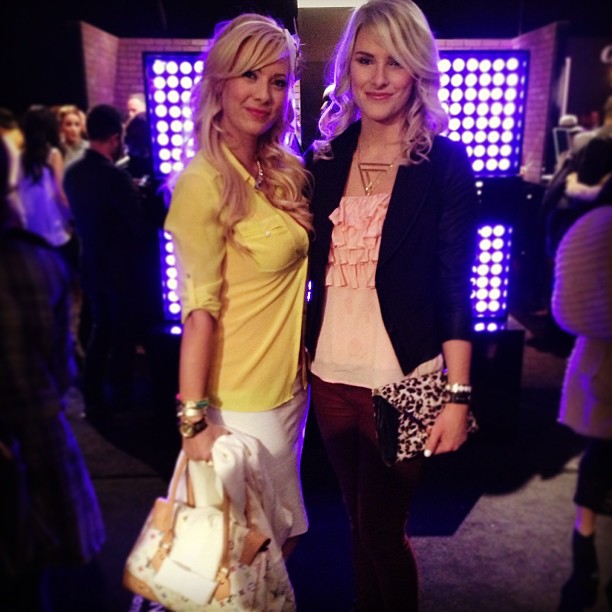 While hanging around, I met fellow blogger Christie from Fashion Translated!  It was such an exciting moment to connect with another blogger in person and chat in real life. 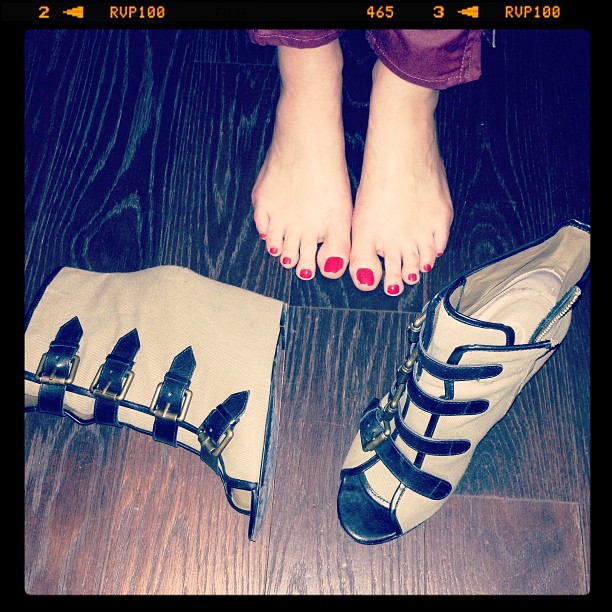 We got back to our hotel around 8pm and decided to rest our feet before walking a couple blocks to The Banknote for dinner.  Burgers and pasta made us very happy girls. 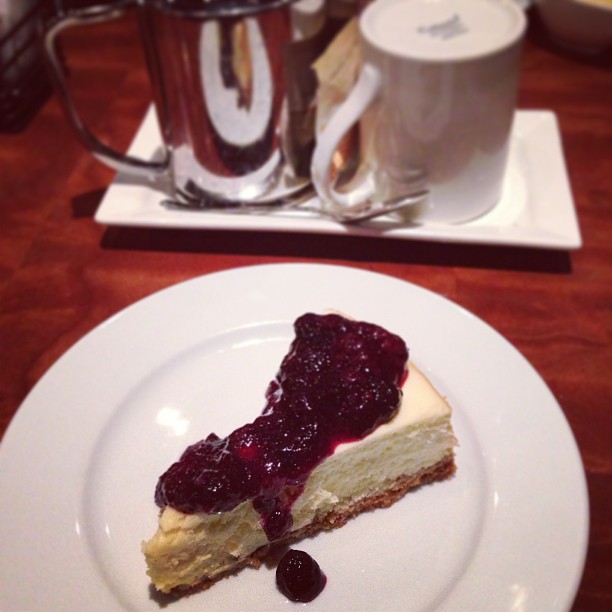 Afterwards, we were feeling something sweet and decided to indulge at the Diner–again–at our hotel.  I had this amazing NY cheesecake and Sarah had the delicious looking pecan pie.  We debating going out but really didn’t know where to go and were pretty much exhausted from the day.  We were all dolled up with no motivation to go out (ha!) so we retreated back to our hotel room, watched some Chelsea Lately, and called it a night (so wild, I know). 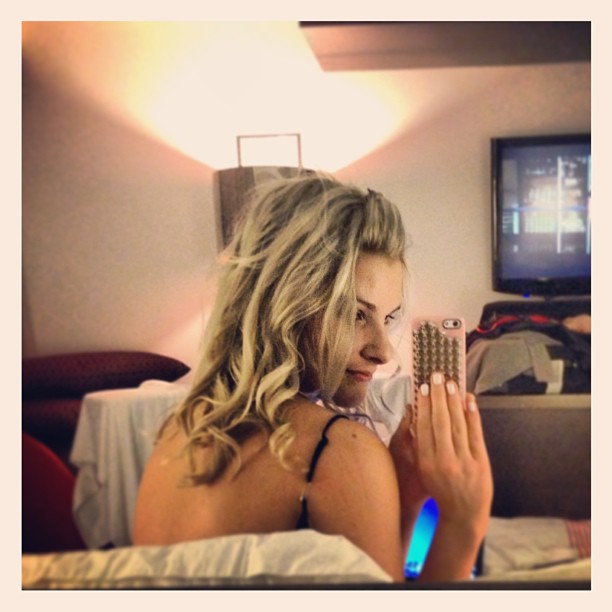