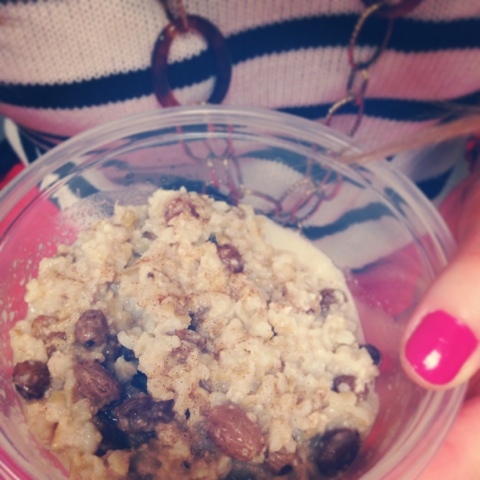 As I’ve gotten older, I’ve developed a mad love for rice pudding.  I know, kind of weird, but I just love it.  I don’t eat it often, maybe a few times a year, but it’s at the top of my favourite dessert-like foods.

When Sarah brought a healthier version to work that she made at home, I forced her to share the recipe with me so I could share with you.  Behold, healthier (ish) rice pudding!

Combine all ingredients in a 2 quart baking dish. Mix well.  Bake in the oven for 1 hour, stirring after 15 minutes and again when pudding is done.

Sarah’s notes:
It will seem a bit runny, but the mix thickens as it cools…if you feel it is too “thin”, leave in for another 5-10 mins, not longer than that or it starts to separate and doesn’t create a pudding (too thick).

Sprinkle with cinnamon or cinnamon sugar when finished or before eating a serving. Enjoy!