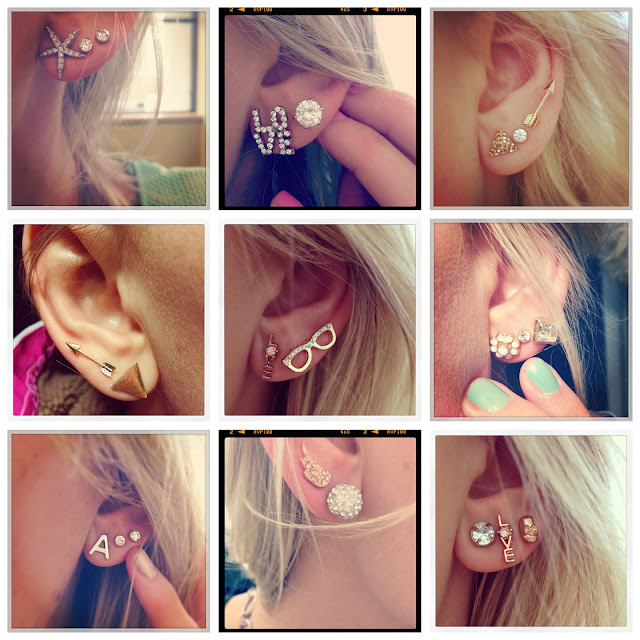 I have had my ears pierced since I was a baby, mainly because I came out looking like a boy and despite my mother dressing me in all pink, people would still comment what a ‘cute little boy’ I was.  Yeah.  That happened.

When I was 12, my childhood best friend and I went to a drugstore nearby and split a pack of earrings to each pierce a second hole in one ear (mine left, hers right).  It was like a friendship piercing.  Totally.

After that, my parents were very strict and would not let me get anymore.  However, I think around 16 I convinced my Dad I needed a third and second hole and he finally gave in (he was more strict than my Mom on that front, which was shocking).

Over the years though, those last piercings would get infected over and over again, especially the third hole and eventually I grew out of wearing so much jewellery in my ears I went down to the original first holes only.  However, back at the beginning of this year, I wanted to see if I could shove some earrings through the holes again.  I basically had to re-pierce that third hole (with an earring), and after a lot of wincing and watery eyes, I poked through.  My ear was super red and unhappy, but I took good care of it over the course of the next two months and kept the earring in to sleep despite it being so sore (so bad that I couldn’t sleep on my left side for weeks; but I was determined).

Now, many months later, all holes are perfectly normal for the first time in my life and I can change up the jewellery as I please on the daily.  Since then, I’ve acquired a ton of different stud-like earrings to switch things up–normally I’d just rock two large faux diamonds in the first hole.  I love mismatching my earrings and since they are small, it’s not too in-your-face but a subtle, easy touch that adds some interest to my look.