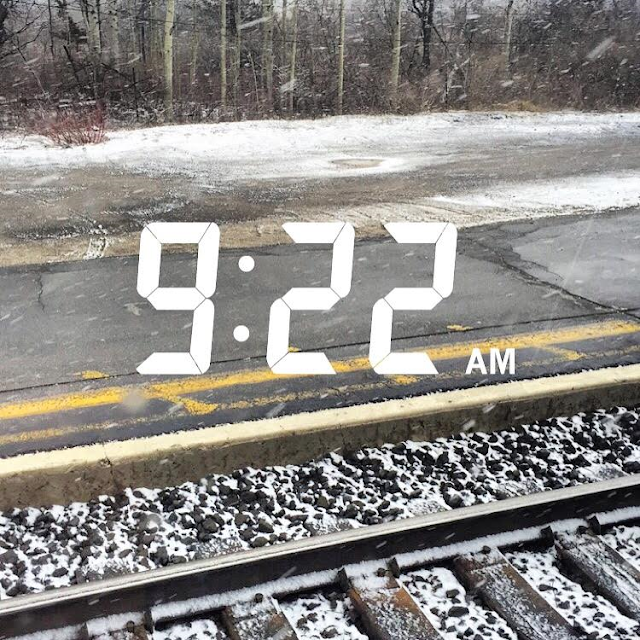 Hi ladies, and happy Monday.  If you follow me on Snap (I’m acoest1984) or Insta, you saw that I was in Toronto for a long weekend with Marco.  We had such a great time, it was such a nice mini getaway.

We walked a ton (like 10kms a day!  I started using the Pacer app to track my steps, it was fun to check in at the end of the day–definitely don’t walk anywhere near that much at home), saw a lot, met up with friends and more.  I’d love to share a huge photo overload, if you’d like to see…

More photos after the jump… 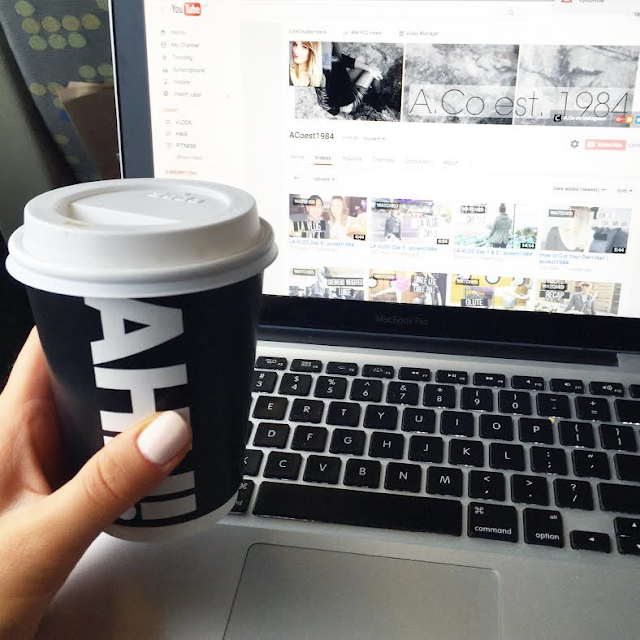 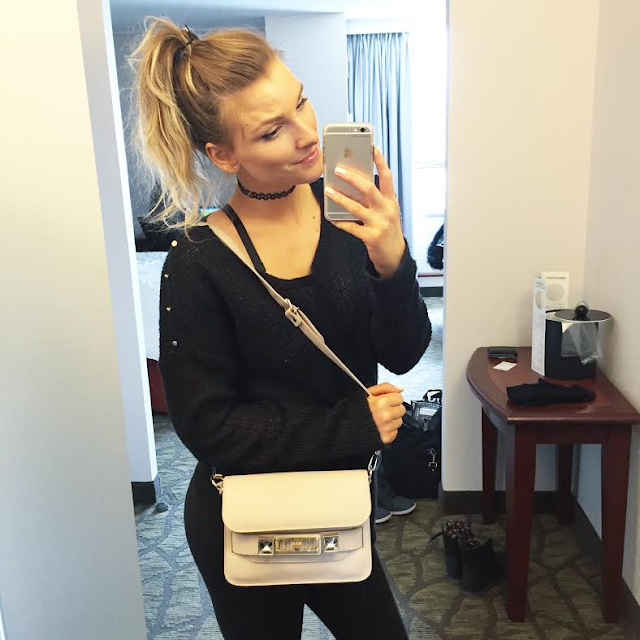 We were up super early on Friday morning to take the train down to Toronto.  It’s about four hours, and I spent the time surfing the web and doing a bit of work.  I brought my laptop with me, as I always do, and never opened it once after the train ride.

We stayed at the Chelsea Hotel which is right downtown and super close to the Eaton Centre and Dundas Square.  Upon arrival, we checked in (view below) and were famished, so off we went in search of a late breakfast.  We ended up going to a diner on the corner which wasn’t my favourite, but definitely man-approved, ha! 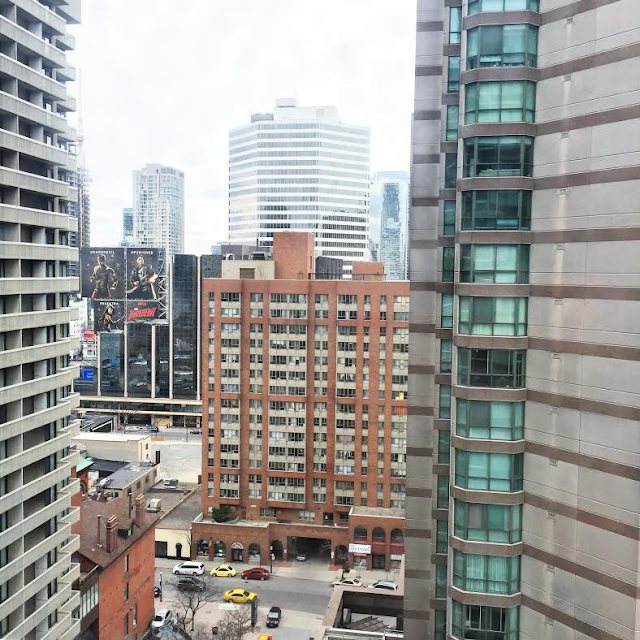 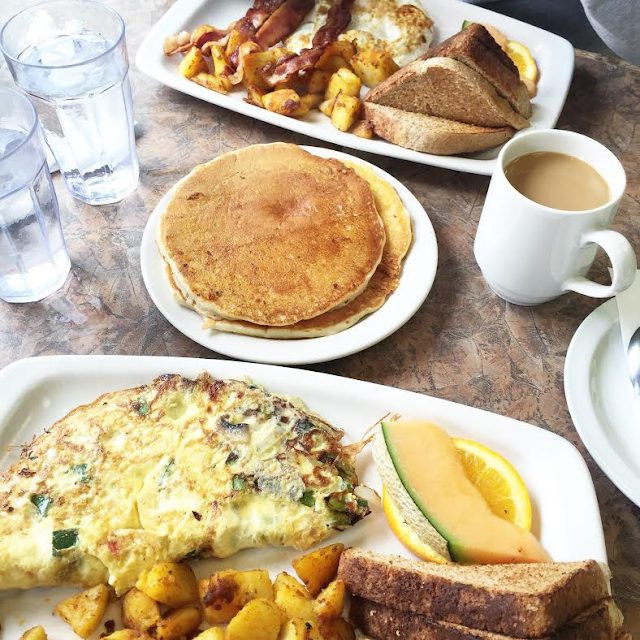 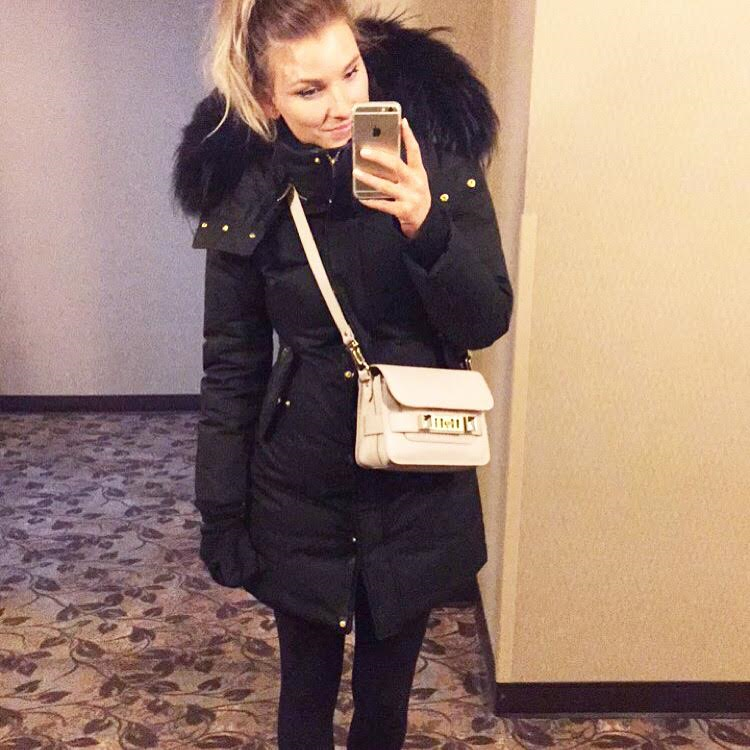 After relaxing at the hotel for a bit, I decided to venture over to the Eaton Centre. 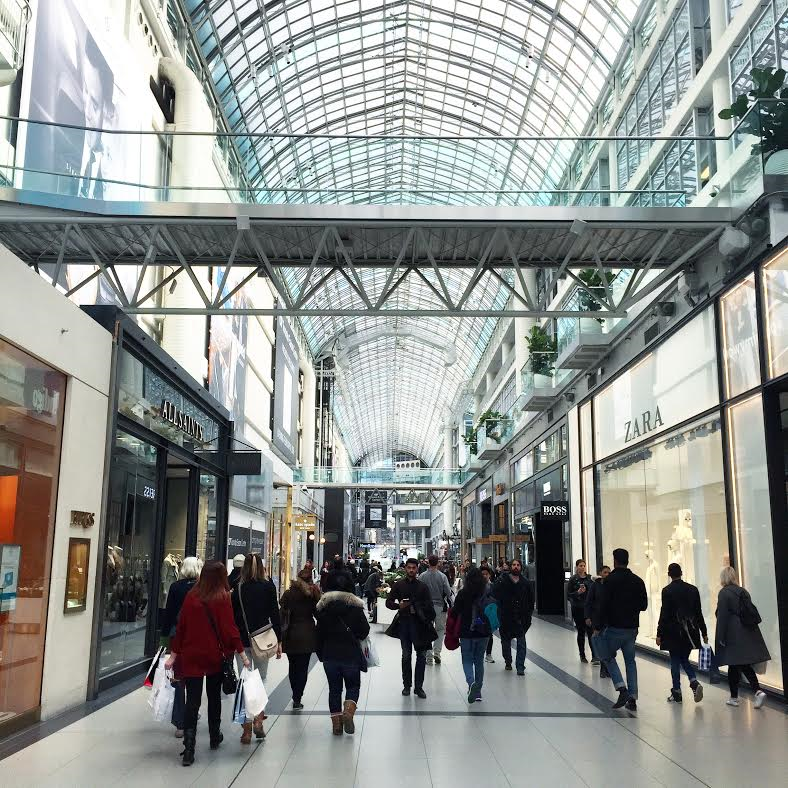 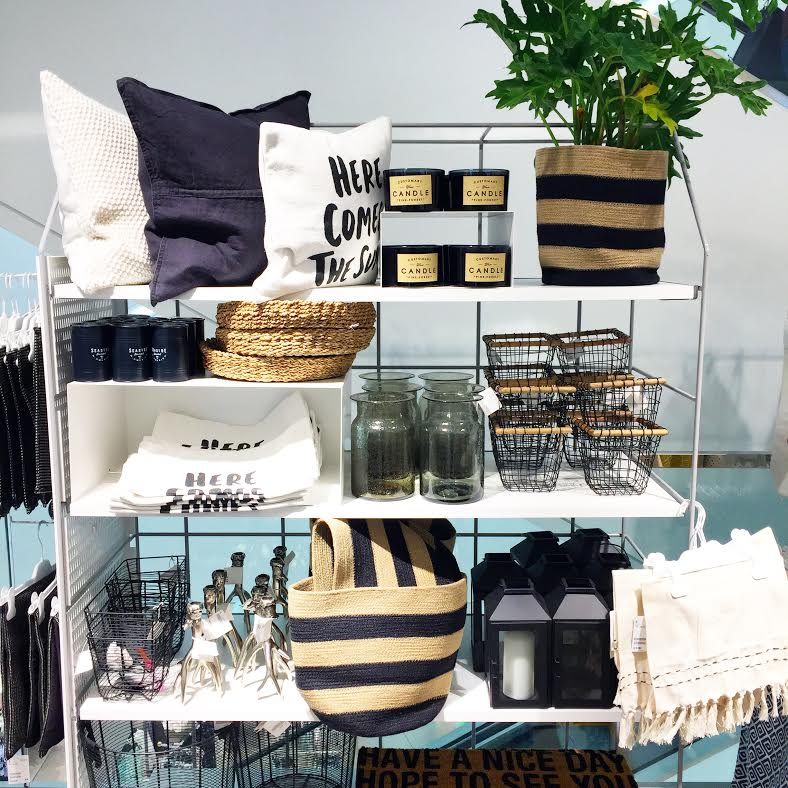 My Torontonian girlfriend advised me to check out the new home section of H&M and it surely didn’t disappoint.  This was just a fraction of all the beautiful stuff they had to offer–I had a hard time not getting anything.  Apparently they are bringing online shopping in soon though so we can order from the comfort of our own homes–yay! 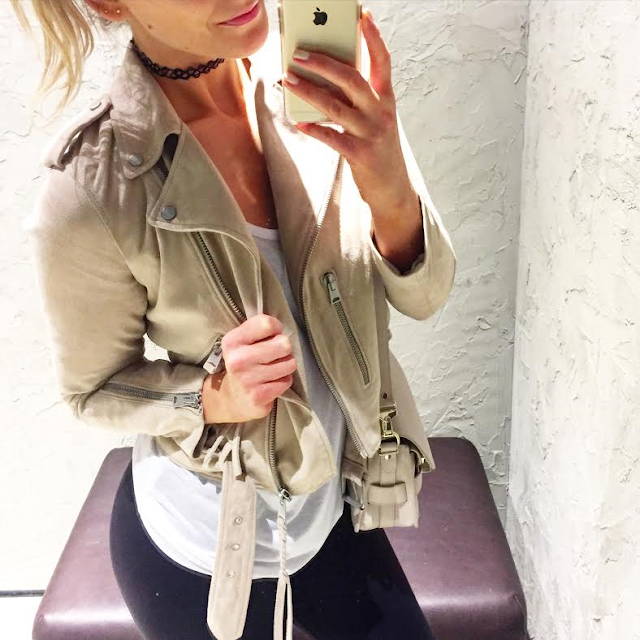 This jacket you guys.  So, I’ve had my eye on this suede stunner for a couple months now–and have basically been stalking it online.  I was ecstatic to find out there was an All Saints store in the Eaton Centre, it was basically the main reason for my trip to the mall that day.

So I get to the store, they have two of these jackets left–and it’s not even available online anymore–and one is in my size.  I wasn’t planning on purchasing such an expensive piece that day but of course had to try it on.  Honestly, I was a little relieved that I didn’t love it when I put it on, but even more shocked.  The suede is so soft and the jacket drapes really nicely because of it, but it just wasn’t doing anything for me.  Safe to say that all that glitters isn’t necessarily gold and I’m so glad I never pulled the trigger on ordering this online.

Also, I got so many compliments on this choker–one girl even said, ‘I used to wear those in Middle School! …Where can I find one!?’  Ha.  Me too girl, me too. 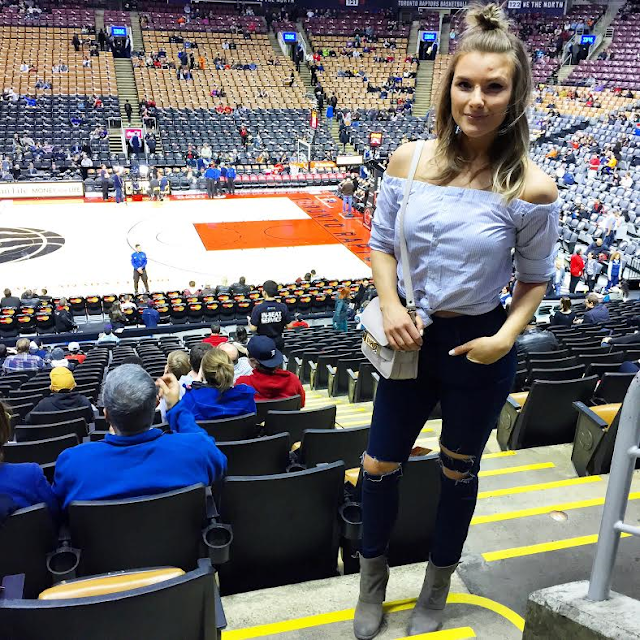 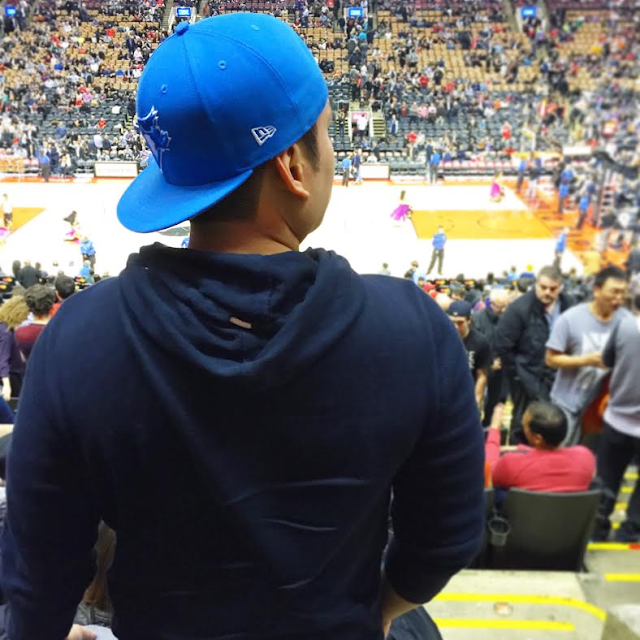 Then, that evening, we went to see the Raptors game, which was so much fun.  We saw them play last season and really love this team.  Basketball is the one sport I played when I was younger, so I fully understand it and enjoy watching.  As a bonus, they won so it was a great time! 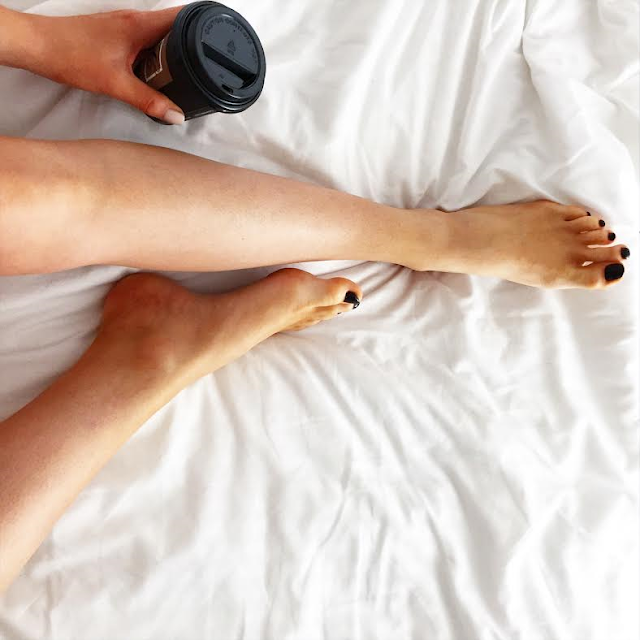 Saturday morning we slept in–so awesome–and took our time getting ready for the day.

The photo below is a plant wall they had at our hotel which I was convinced would be the perfect photo op spot… until we didn’t take any photos on it.  Still, I had to share it because it was so lush and beautiful. 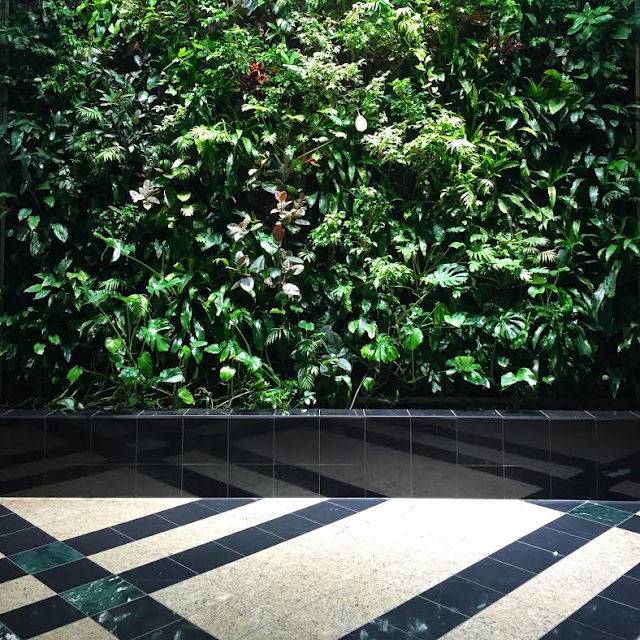 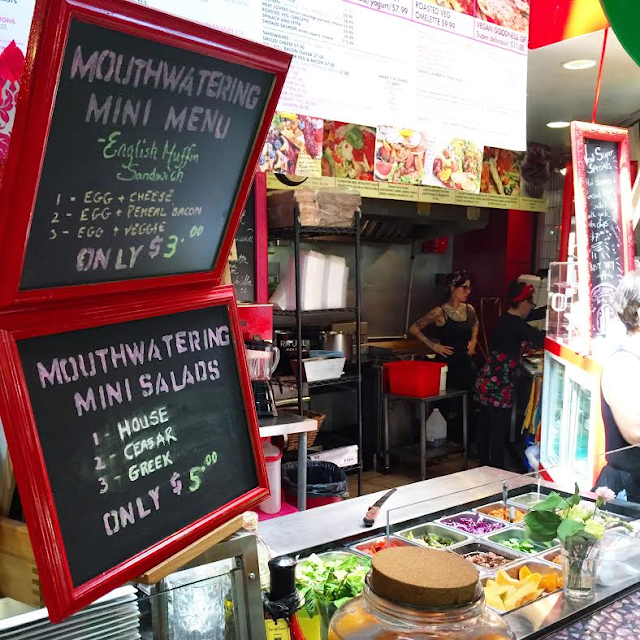 I spent about 20 minutes in the morning going through a ton of breakfast/brunch spots within walking distance.  I finally decided on Karine’s and off we went.  It was a super brisk morning, but we too refudge inside the small-ish food court where Karine’s is located.

To be honest, it was a surprise finding this gem inside a food court, but the meal did not disappoint.  With tons of fresh ingredients, gluten-free options, and endless amounts of fruit, I was excited at what we were about to enjoy.

You walk up to the counter, order your meal from the sweetest woman who puts you in the best mood by calling everyone, ‘baby’ or ‘honey darling’.  From there, you wait about 5 minutes for your meal and take a seat.  I loved that they had red table clothes covering the tables in the food court in their ‘section’–it really added to the atmosphere.

The food was incredible, and when I asked for some jam, the woman pulled out a massive container of home-made jam and ladled it onto my toast.  Seriously the best jam I’ve ever had.  #nom 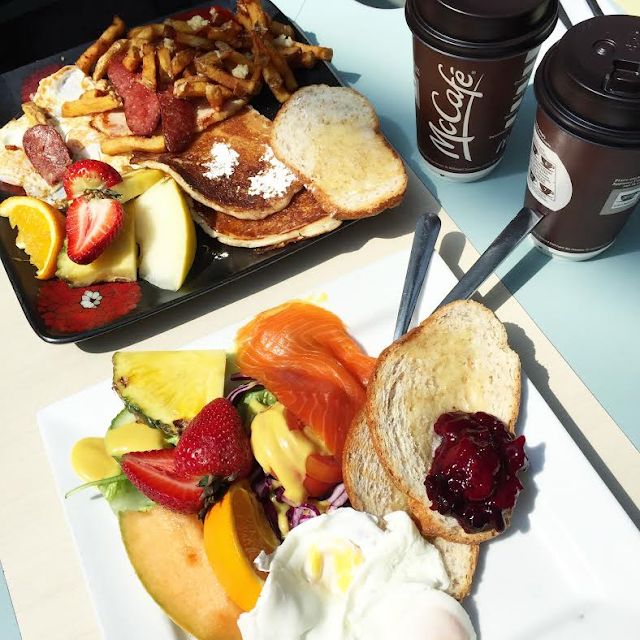 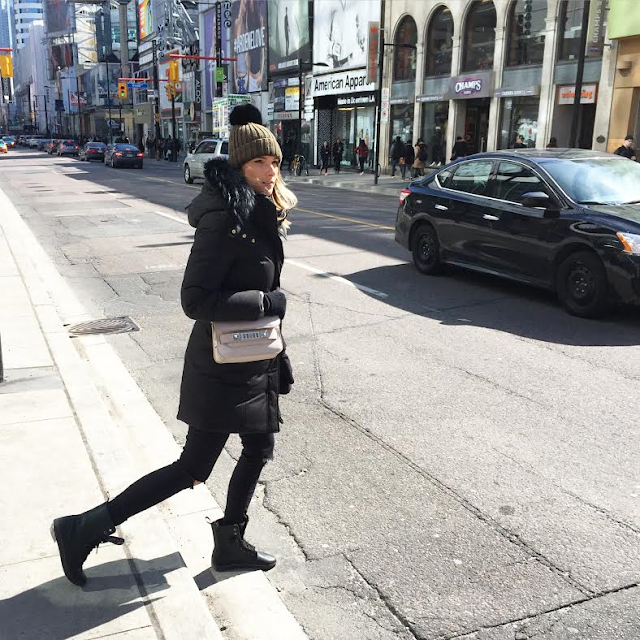 Afterwards, we spent the afternoon wandering around–popping into shops, the mall and eventually grabbing a bite to eat later in the afternoon–including my first ever Bubble Tea!

It was freezing all weekend, so I was so glad I packed my warmest jacket along with a hat and mitts.  Like I mentioned, we were walking a ton so comfort and warmth were key.  Also, tons of compliments on these boots, one guy even said, ‘I’ve never seen that style of Doc before–love it’.  They are so comfy, edgy and they are on sale now! 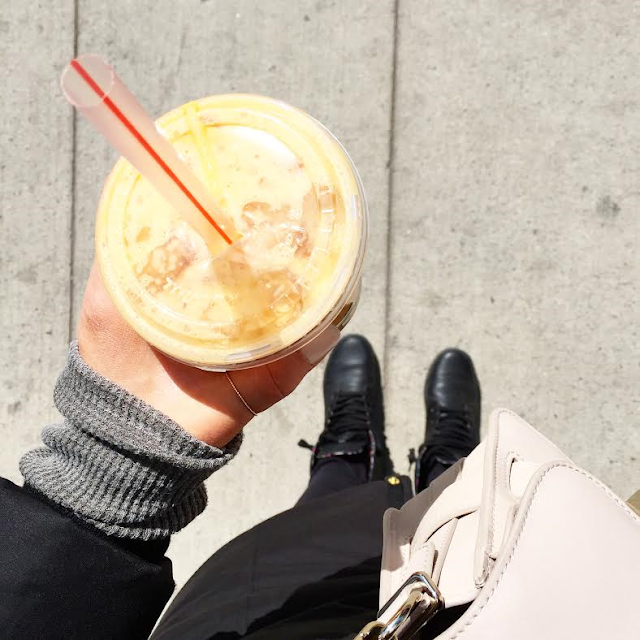 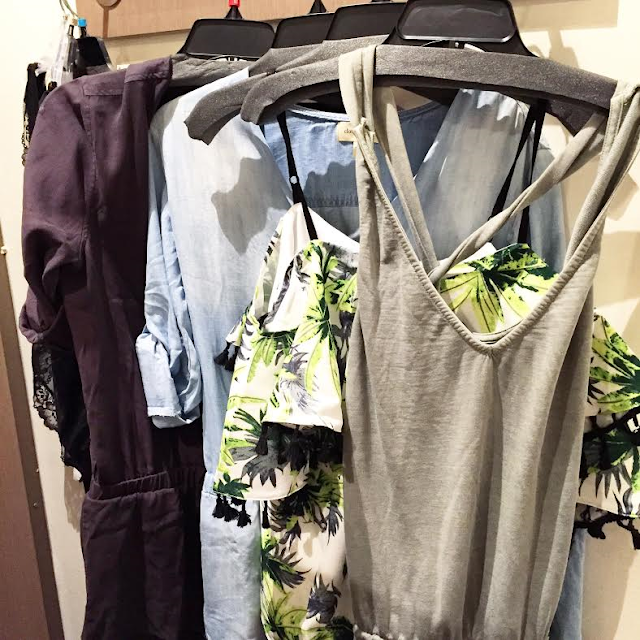 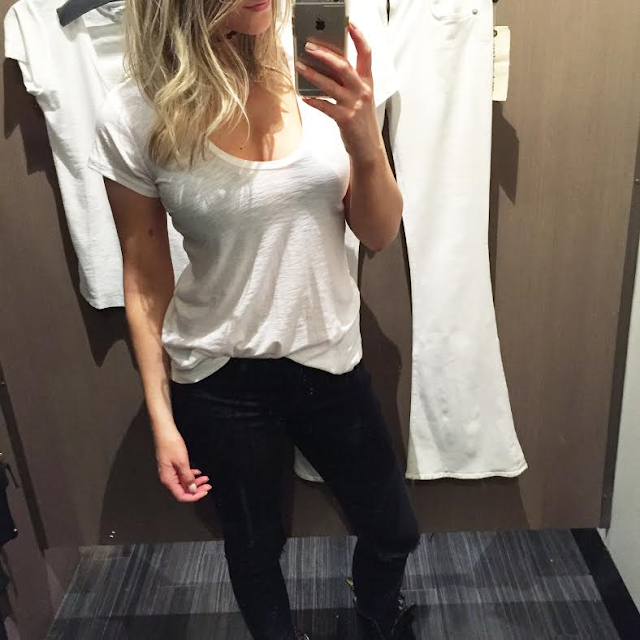 Marco ended up going back to the hotel to relax for a bit and I continued shopping.  There is a massive Marshalls and Winners on Yonge Street and I ended up finding a couple things (after trying on tons of stuff).

The rompers above all sucked on me–I never have much luck with those–but I loved the tee above and the flares below. 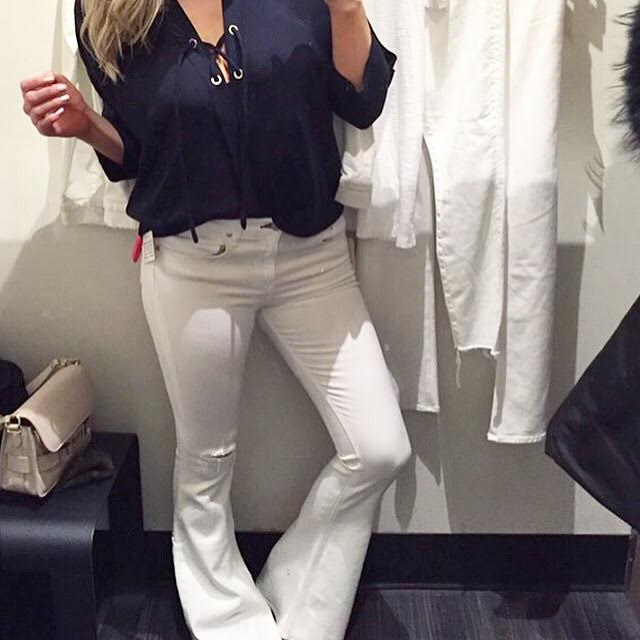 I loved this Iro top so much (you guys know how much I love that brand!), and while it was deeply discounted, it was still a pricier find.  Also, how ironic is this!?  Tweet and you shall receive! 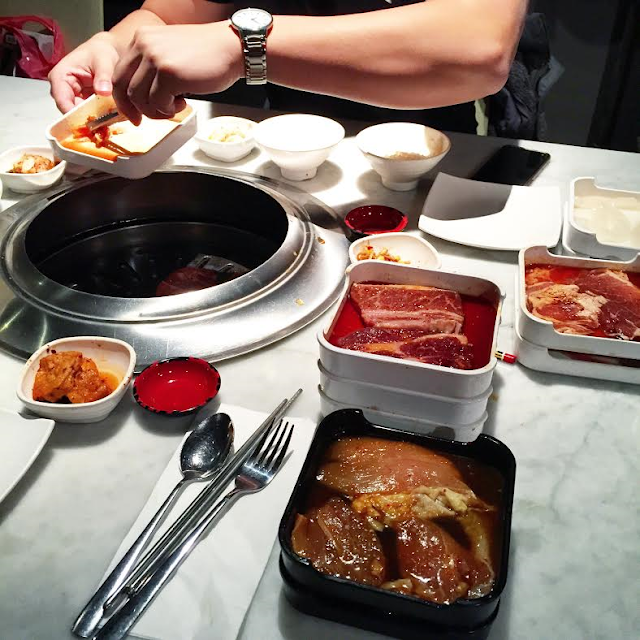 Later that evening, we went out for Korean BBQ–a Toronto tradition–and it was so good.  We don’t have any good spots in Ottawa for this so we always take advantage when travelling if there is one nearby.

If you’ve never done Korean BBQ, you cook your own food on a grill that’s located inside the centre of the table.  Your order your selections, kind of like all-you-can eat style, and cook them yourself.  The servers return routinely and you can order more food. 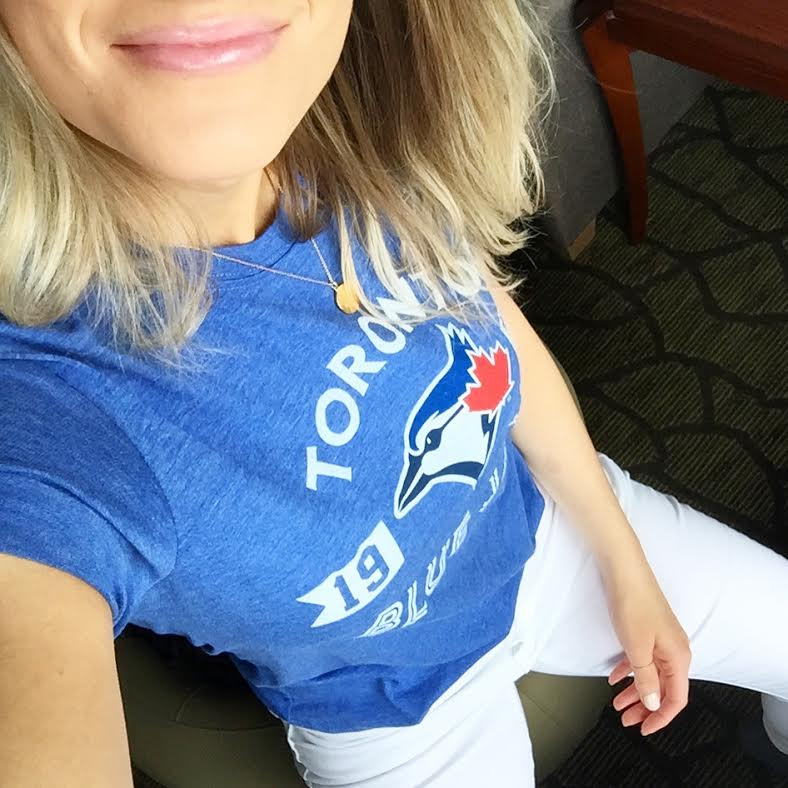 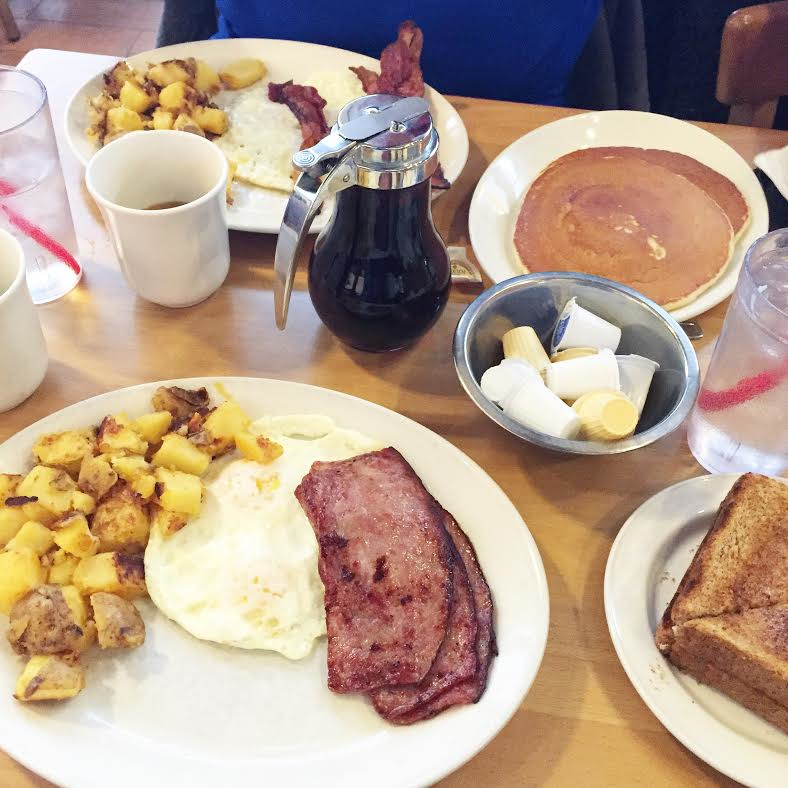 On Sunday morning, our last day in the city, we got up early and ventured out to find breakfast.  We ended up at the Sunrise Grill, a somewhat-greasy spoon spot on Yonge that was buzzing with people.  After we ate, we meandered back to the hotel to meet up with our friends and head out to the Jays game. 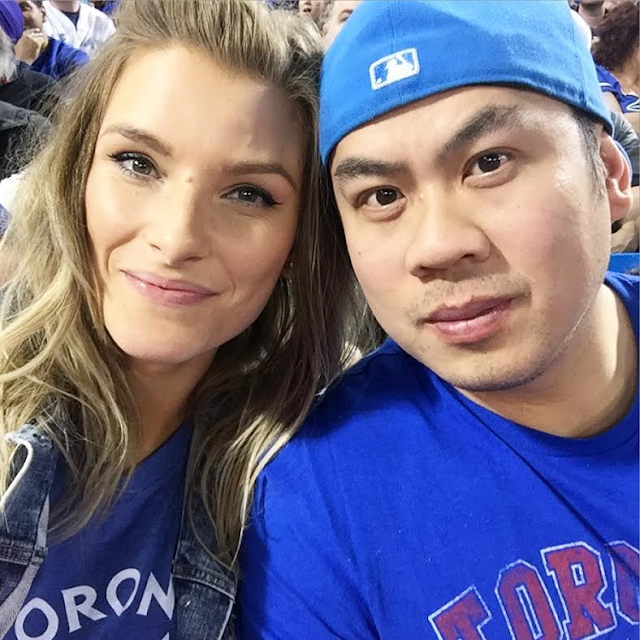 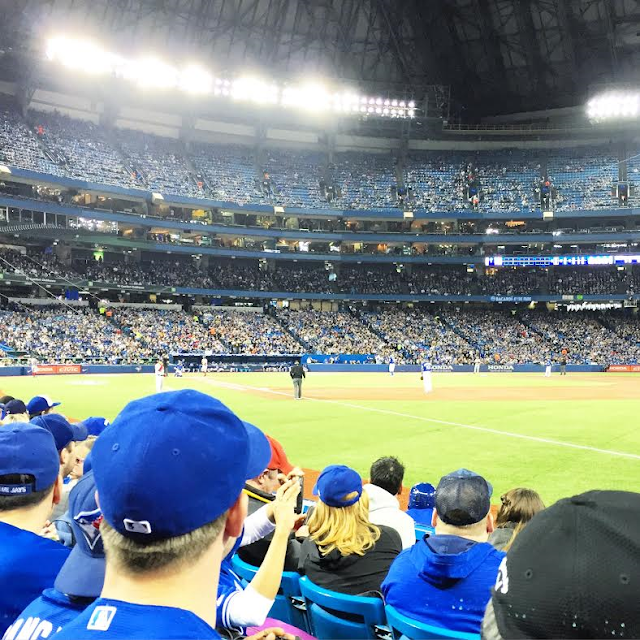 Marco scored us some awesome seats and the Jays ended up winning!  We had a great time, drank beer, ate sausages, peanuts & took in the atmosphere. 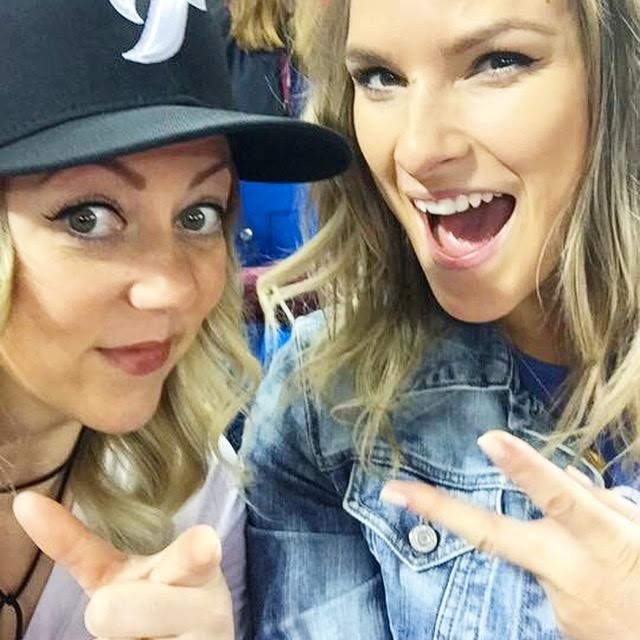 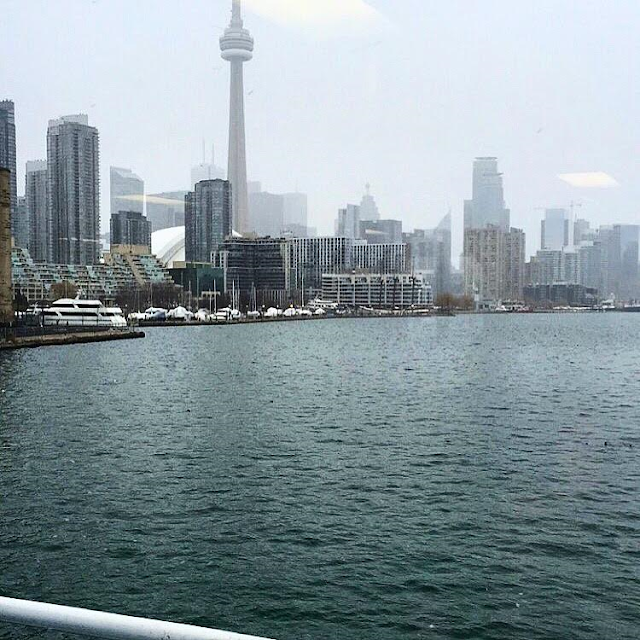 Then, it was back to the hotel to pack up and head home.  I took this photo from the ferry as it headed to the island airport.  Until next time, TO.