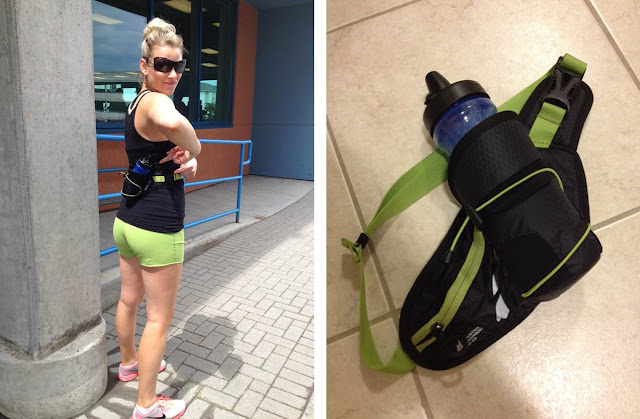 I have been running for about a year and a half.   I ran for almost two years and gave it up for a year before taking it up again.  Never in my life did I think I could be ‘a runner’.  I used to look at people who ran and think, ‘How can they run?’   And then silently, ‘I could never do that…‘  And here we are several years later, and I’m running.  Whoa.

If you read my blog, you might know that I workout but I’m often dragging my butt to the gym (or to the streets) to get my fitness on.  It’s not that I don’t like being active, I do, I love being in shape and being healthy but I also suffer from that thing most people do: I love to sit on the couch and veg out.  Ha.  However, I love treats and dessert and all those delicious things so to feel less guilty about it all, working out is a compromise, I suppose.

For me, working out has always been an evening thing.  After work, head to the gym, do a class or get on a cardio machine, put in my time and go home.  However, since the weather has become nice, the idea of running on my lunch hour popped into my head.

Okay.  I know what you’re thinking: who works out on their lunch hour?!

Well, that’s certainly how I was thinking before.  It’s rushed.  You get all sweaty.  There isn’t enough time.

It is a little rushed.  And you do get pretty sweaty.  And you certainly don’t look as good as you did in the morning.  But.  There are showers.  And hair dryers.  And if you pack accordingly, it can work out (get it? Work. Out… ‘eh?  ‘Eh?!)

We just finished our fourth week of running-on-lunch and average anywhere from three to five lunch hour runs per week!  Crazy, right?  But it feels so good!  We try to aim for 5km and even did a 6km one day (that ones a little tight to get out and back within an hour).  We are consistently bringing our time down (we are around a 32 minute 5km) and keeping each other company.  It’s pretty nice.  Minus the hardcore-ness of it all.

So the other day, after weeks of carrying a water bottle during runs (before I always ran indoors, on a treadmill with those handy water bottle holders), I suggested we maybe check out ‘those geeky looking running belts,’ because it’s annoying carrying a bottle while running and to be honest, I cannot run without water (not. even. an option.).  My girlfriend laughed but was totally down and so we took a little trip to MEC.  Sure enough, they had several to choose from, and being the great friends we are, we bought the same one.  Twinsies!

We took out our #handsfreehydration belts for the first time today and are both instantly converted.  ‘What a luxury!’ she cooed as we ran our 5km today, and it’s true.  Totally hands free, you barely notice it and we only paid about $20 for our belts.  Score.  Who are the geeky ones now?!

(BTW, I love using the free app RunKeeper to track our distance, speed, time, and pace.  You can change your settings to whatever you want; I have a voice come on every 5 minutes to tell us how long we’ve been running, the distance thus far, our current speed and our average speed.  At the end, there is a section to write any comments you may want to include about your run, for instance, ‘That was death,’ or, ‘I’m never going to run again’.)