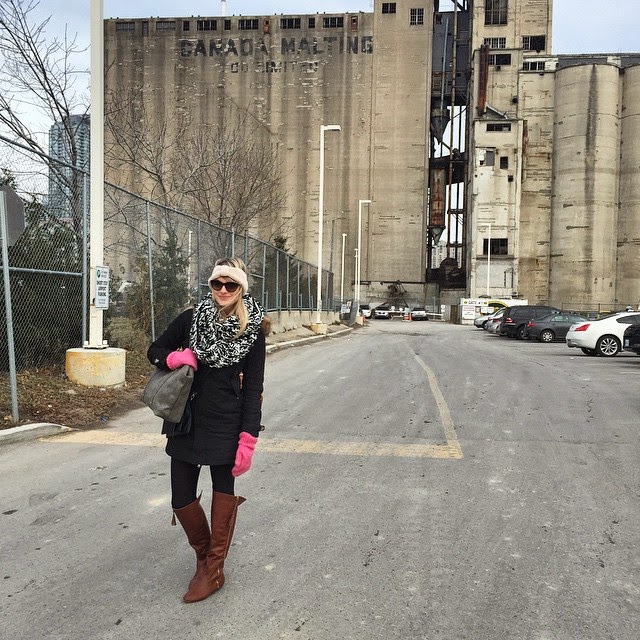 On Friday morning, after a party for Marco’s birthday with our friends, we headed to Toronto for a long (birthday) weekend.  After a short flight we arrived and decided to walk the 3.5kms to our hotel. 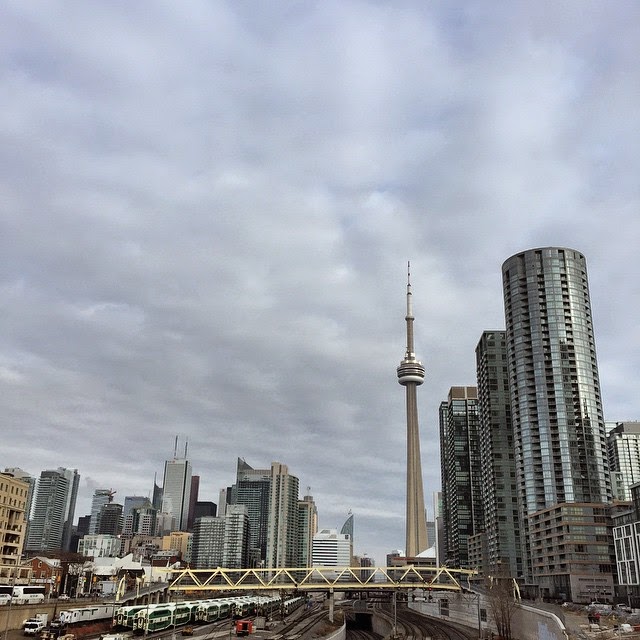 I snapped this pic of the CN Tower in the distance on our way to our hotel while crossing a bridge. 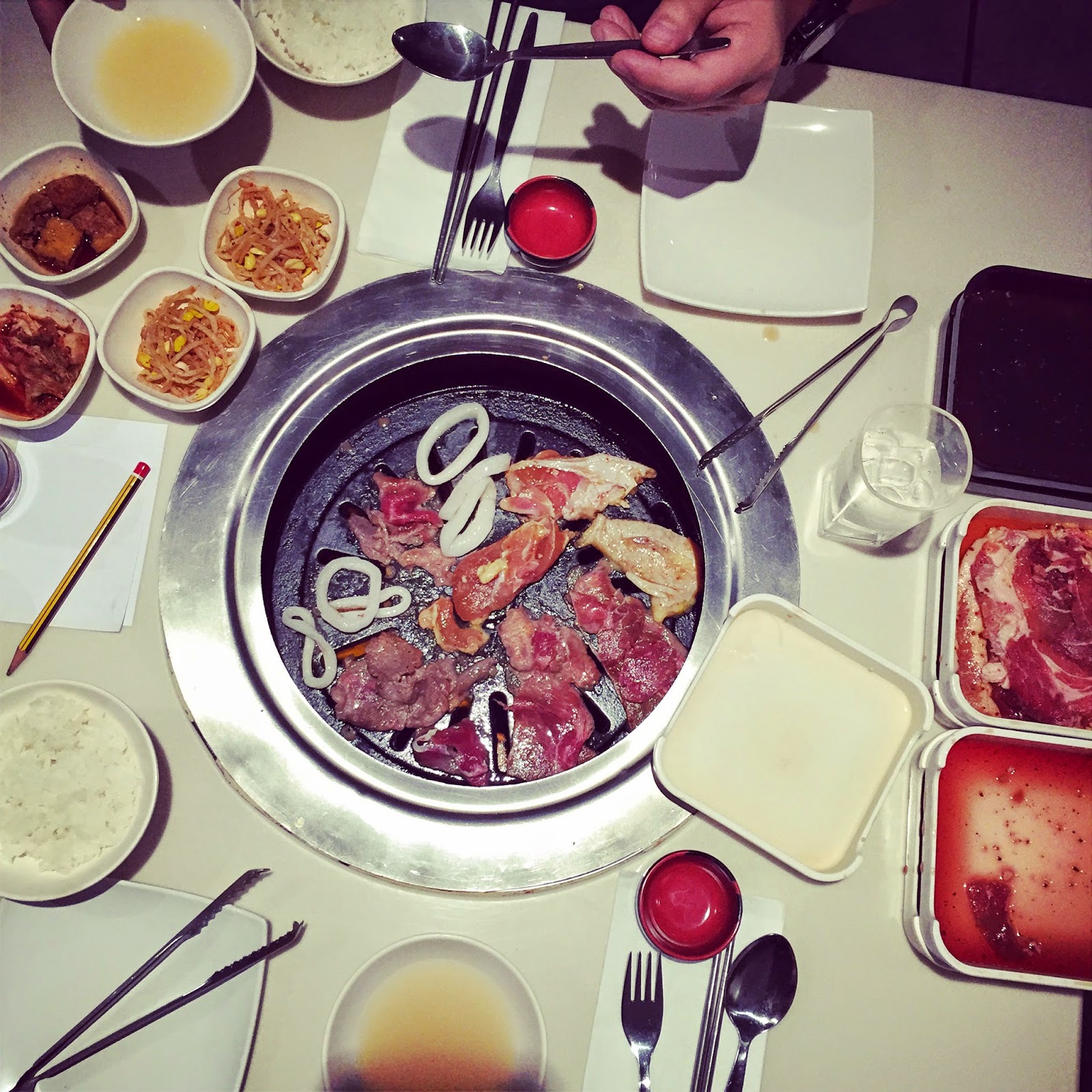 The plan was to grab Korean BBQ at one of Marco’s favourite spots and within a kilometre of our hotel we couldn’t fathom going there and coming back without our bags so we ducked in for some lunch.

Starving with sore shoulders we tucked into the most delicious meal!  It was my first Korean grill experience and it did not disappoint.  Marco took care of the grilling and I took care of the eating (haha).  I’ve been wanting to try this for over a year having seen YouTubers eating it but we don’t have anywhere in Ottawa so this was an exciting experience.  If you like meat and Asian cuisine, this would be right up your alley. 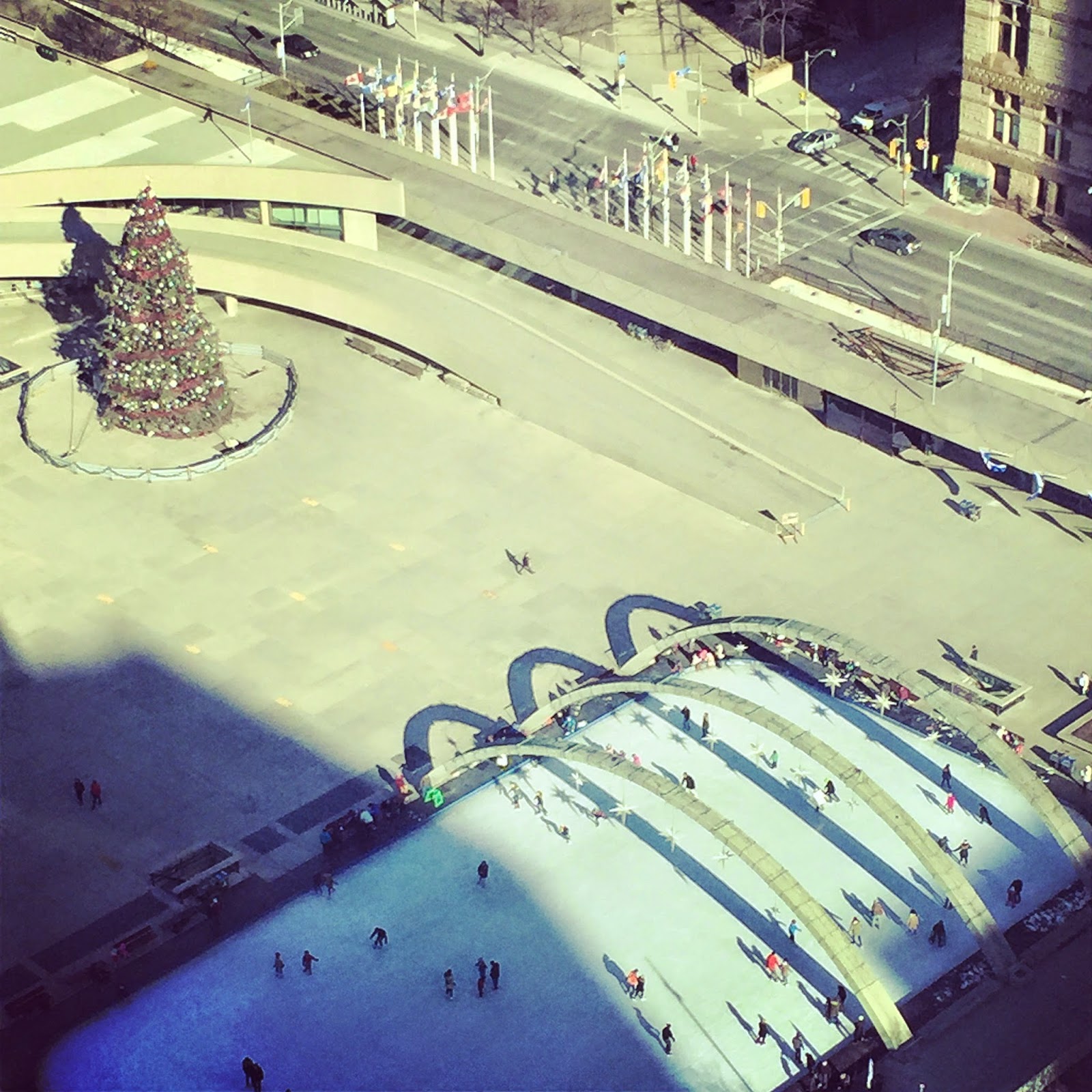 Afterwards, it was onto our hotel.  We stayed at the Sheraton downtown which was nice and we had a really cool view of a skating rink from our room! 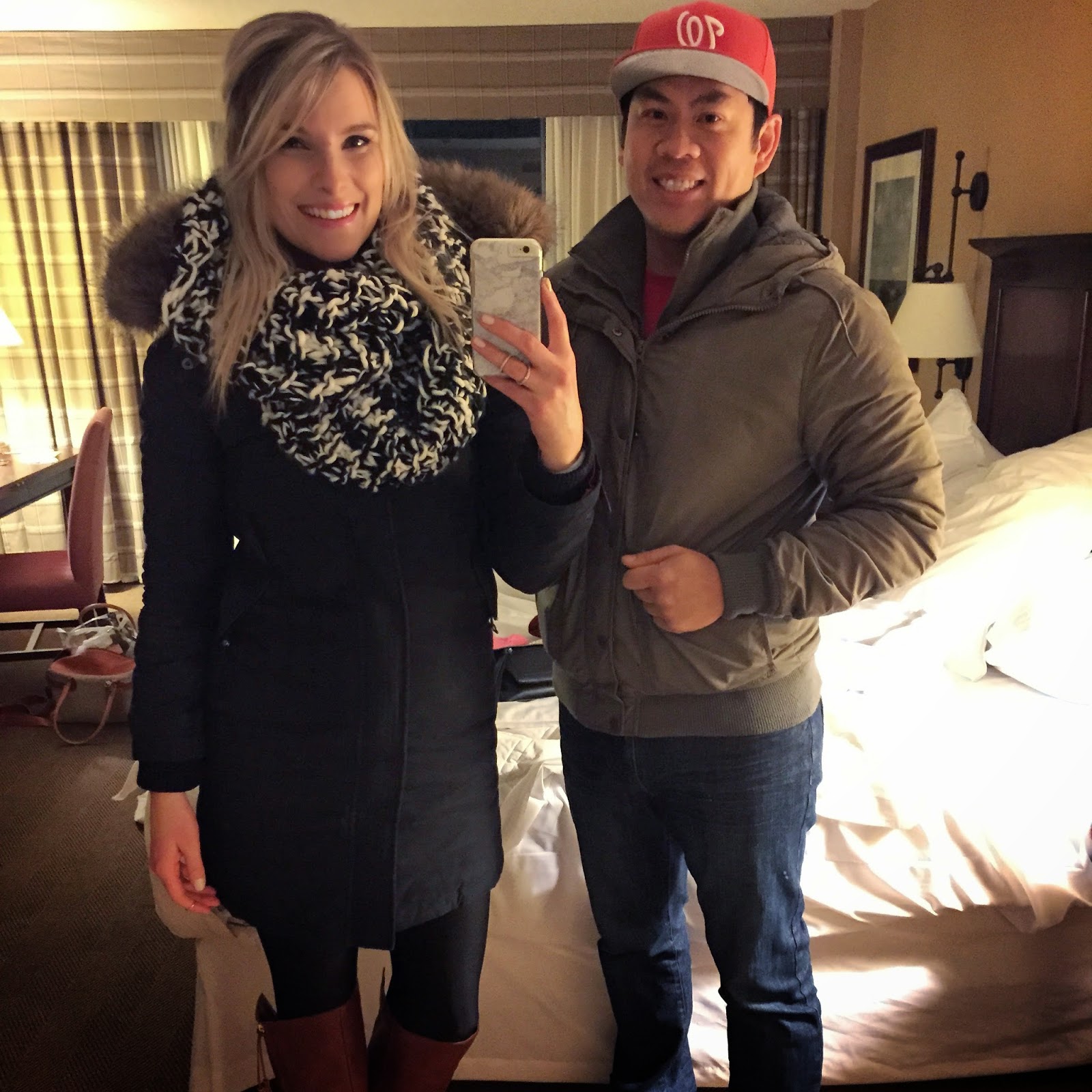 Our first night before heading out.  We mainly walked everywhere as it was all pretty close.  I packed one pair of flat boots which served me well, however, wished I had something fancier for our dinner out (more on that later). 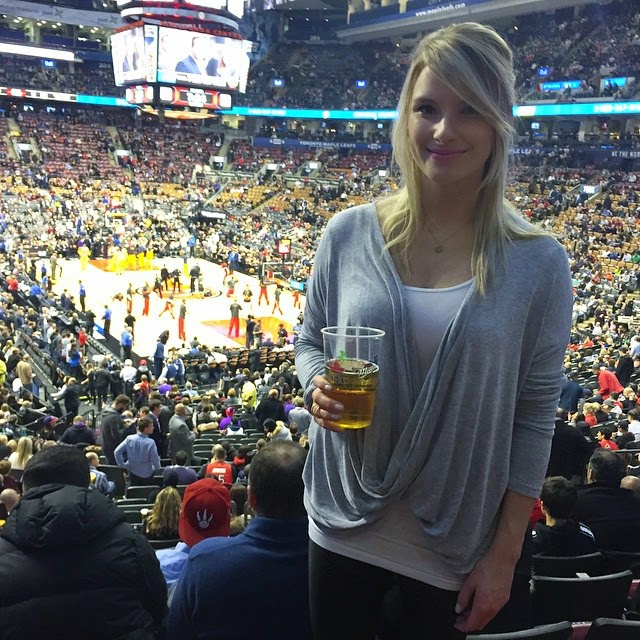 That Raptors game was so cool!  I’m not huge into sports but I used to play basketball when I was much younger so it’s the one game I can kind of follow. 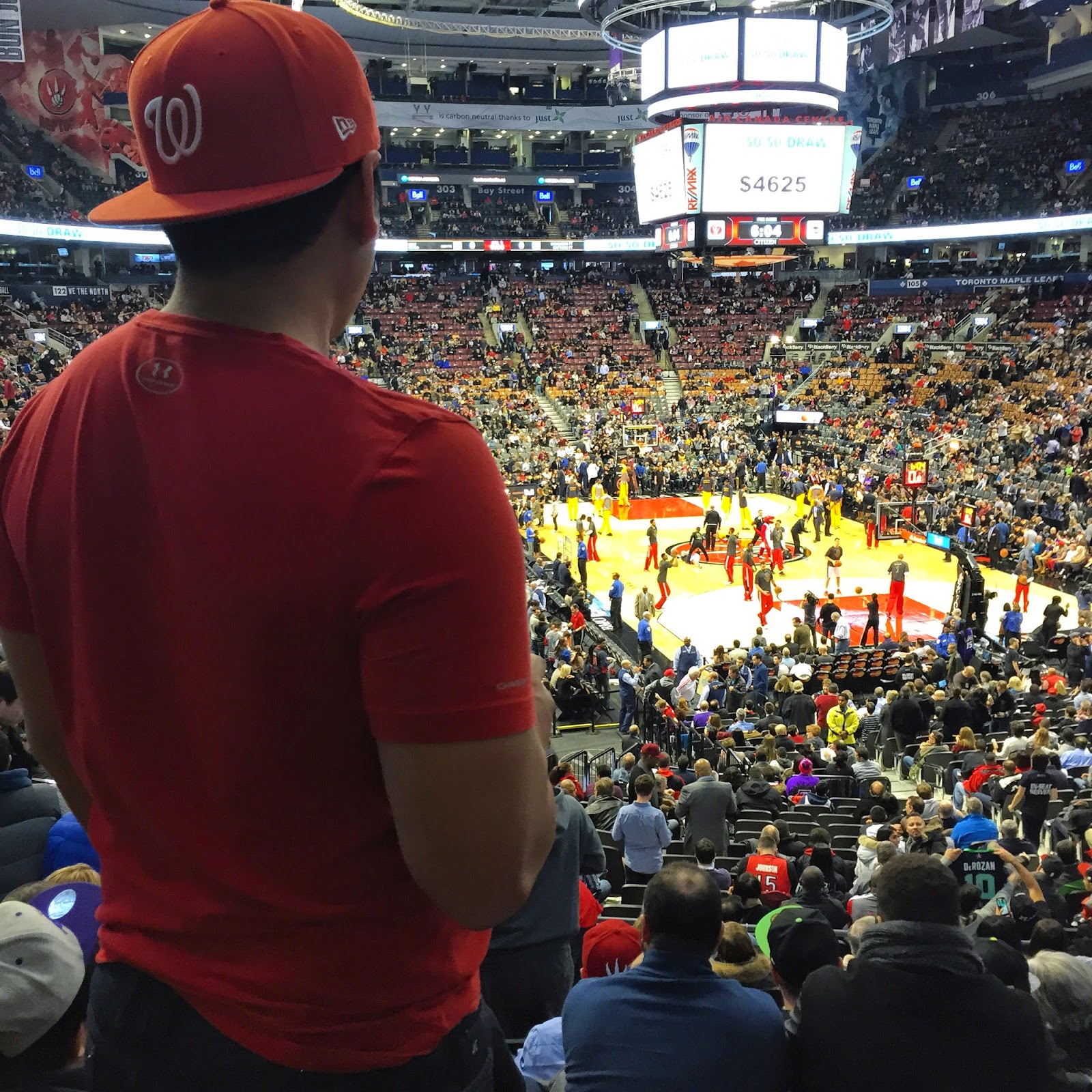 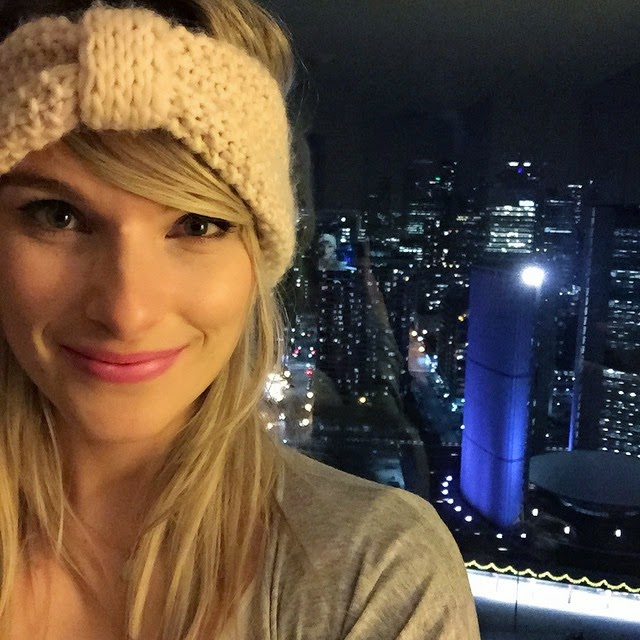 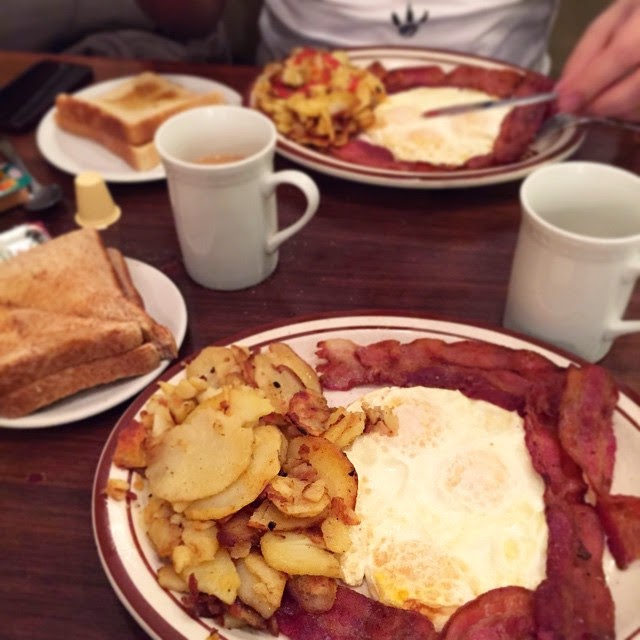 On Saturday morning we walked and walked and walked until I got really hangry and finally found Coach House.  A small, quaint tavern that had a homey feel and amazing food.  It was exactly what we were looking for! 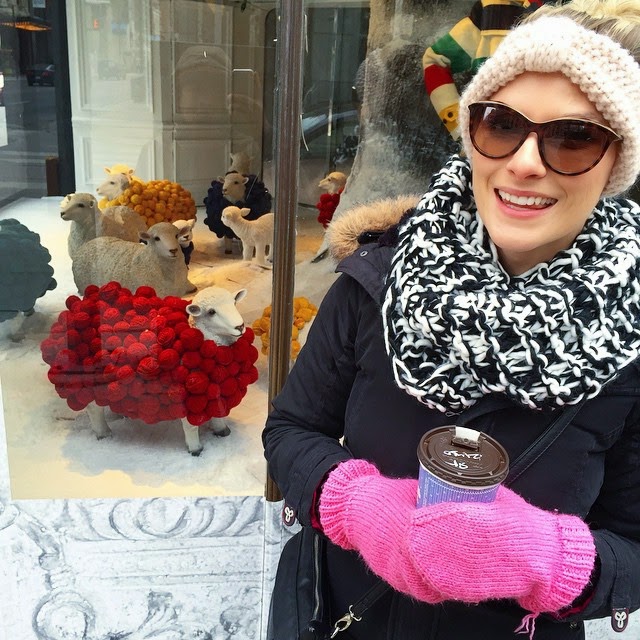 The Christmas windows at The Bay by the Eaton Centre were so cute.  This one had these little sheep covered in yarn balls. 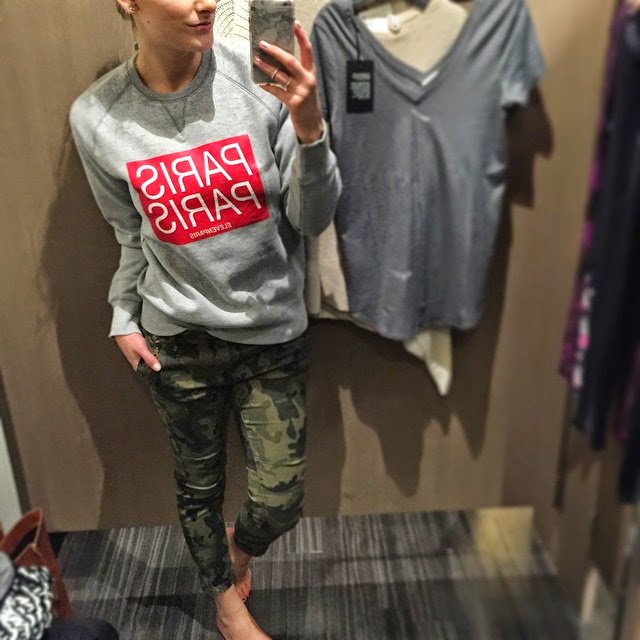 We hit up Winners and Marshalls and I tried on a ton of stuff.  This sweatshirt didn’t end up coming home with me, although very cute.  I did pick up two pairs of workout leggings and a tunic top. 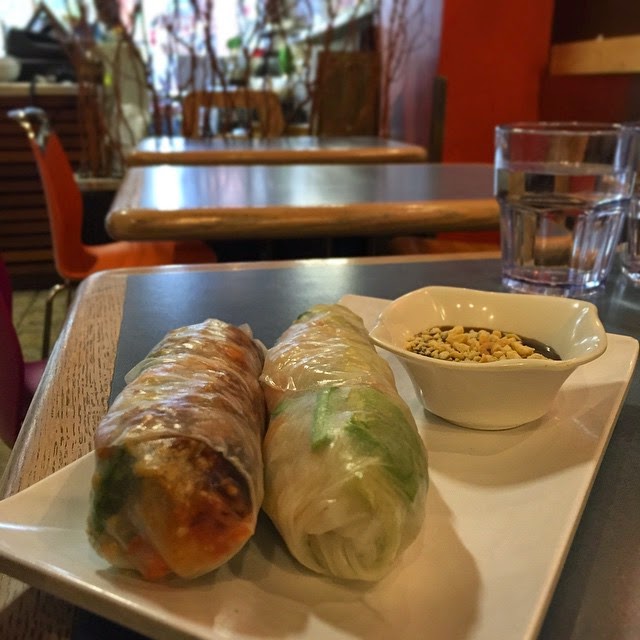 For lunch we hit up Ginger which was another recommendation from Marco, and omg, it did not disappoint.  I kind of gave him a side-eye when he ordered a Vietnamese-style sub but when he gave me a bite, I nearly lost it–so good!  The above are the rice-paper wraps I ordered for myself which were awesome. 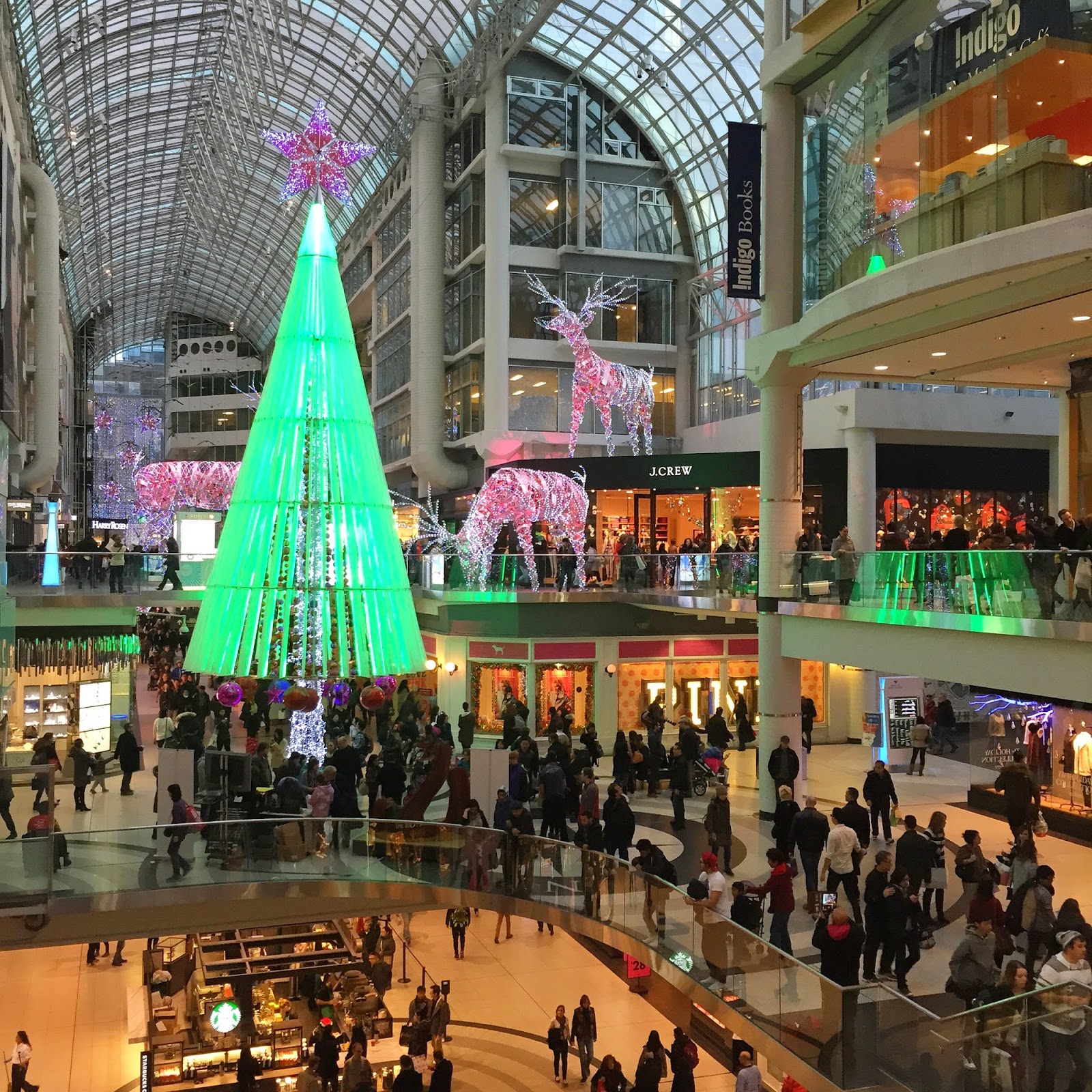 Late afternoon we stopped in at the Eaton Centre and split up to browse.   I didn’t end up finding anything despite searching hard for an outfit for that night.  I was willing and ready to buy some shoes and I found nothing!  I feel like when you are looking for something specific it is so much harder than just browsing and finding things you love. 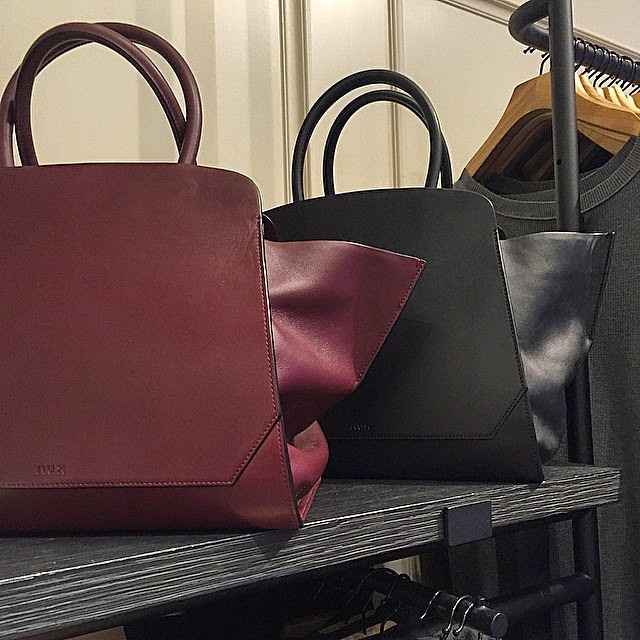 I did however love this (black) Wilfred tote, but the $450 was too steep so I left without it (and am dreaming about it at night). 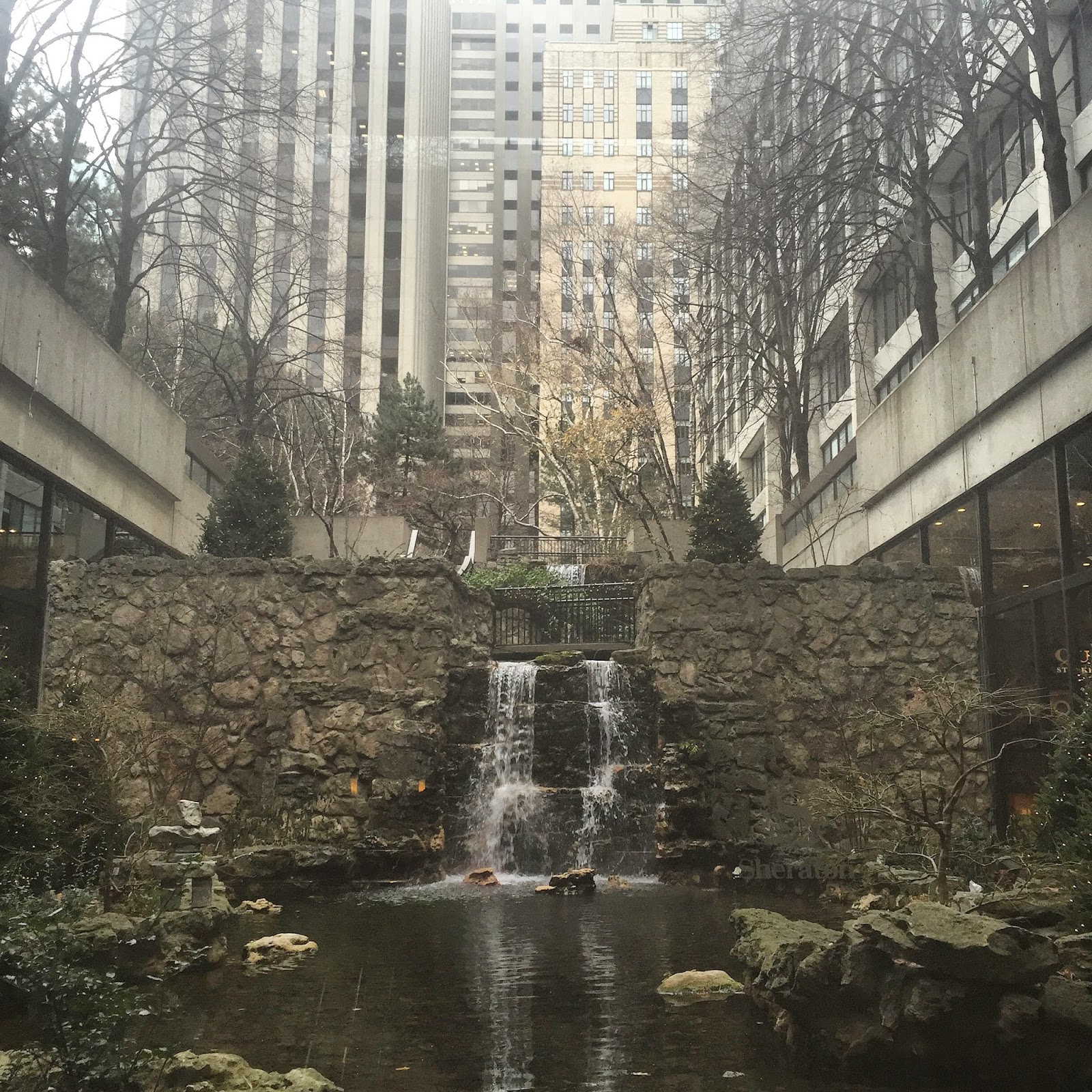 Our hotel wrapped around this cool garden waterfall area which was too pretty not to take a photo, despite being a gloomier day. 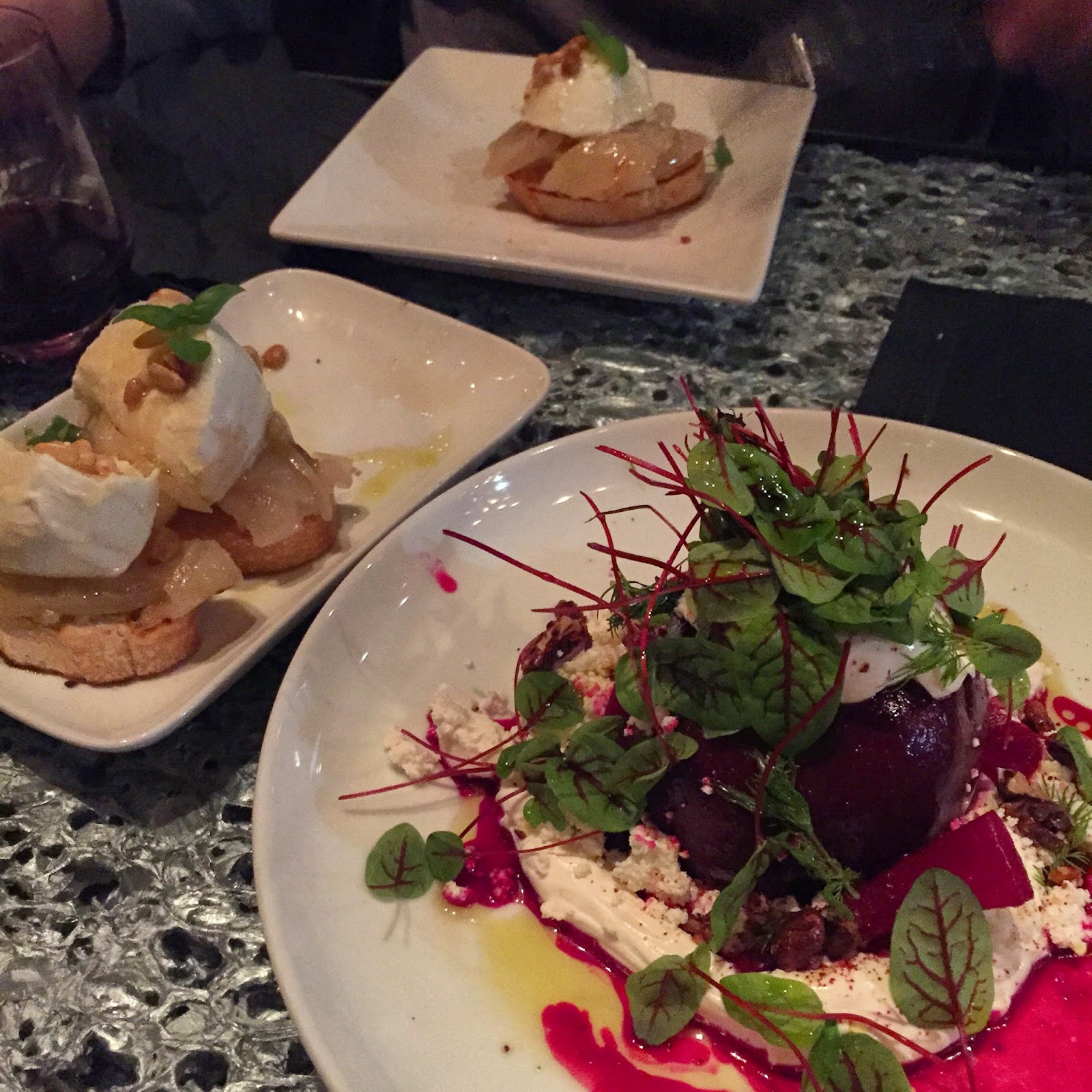 I surprised Marco by taking him to Origin for his birthday dinner.  It’s a chic, modern restaurant with an urban flare that serves amazing sharing plates.  It came highly recommended by a couple friends so I took a chance.  The above is the buffala mozzarella with pear on baguette and the goat cheese beet salad.  To die for.  We also tried the chicken tostada and the beef tartar which was unreal good as well.  The service was okay, but I would definitely recommend it for a different experience. 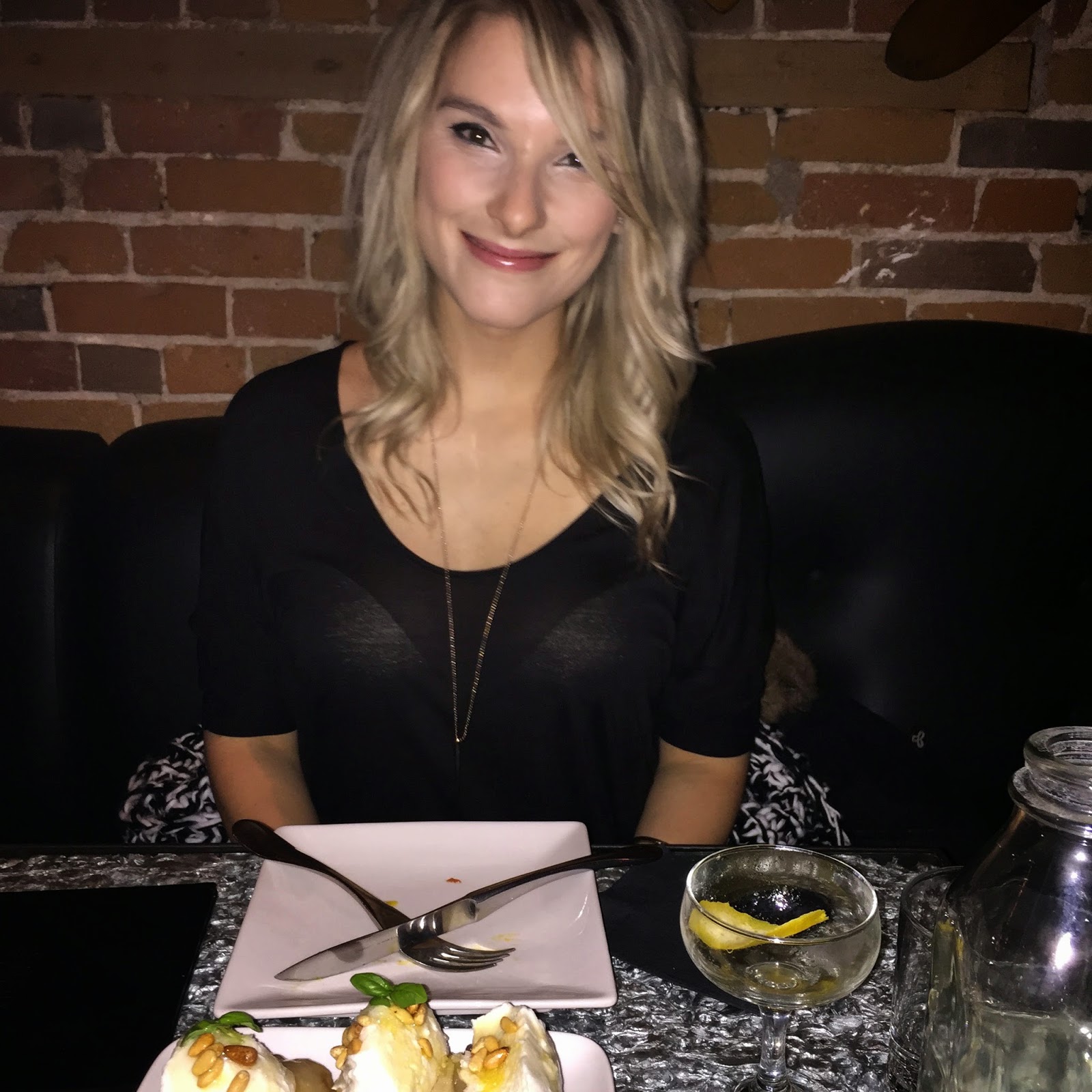 I had fully planned to wear my new tunic top which was a bright royal blue.  If you know me, you know I love neutrals but always feel guilty wearing black at night because it feels like everyone is wearing black (am I right, ladies?).  That said, as I was leaving the Eaton Centre, I looked down and realized I was missing a shopping bag: the Marshalls shopping bag with my new blue top in it!  It was too late, I was out on the street at that point and could only think I possibly left it on a bench while trying on a pair shoes four stores before… surely it would be long gone.  I started to cry a little on the street, which seems silly because it was only $20 but it felt so wasteful having spent hours looking for a top for that night and trying on so many items, and then losing it.  The story ends there, the top is gone and I wore black to dinner–thankfully I had this t-shirt in my luggage and hopefully someone who needs that blue top more is enjoying it. 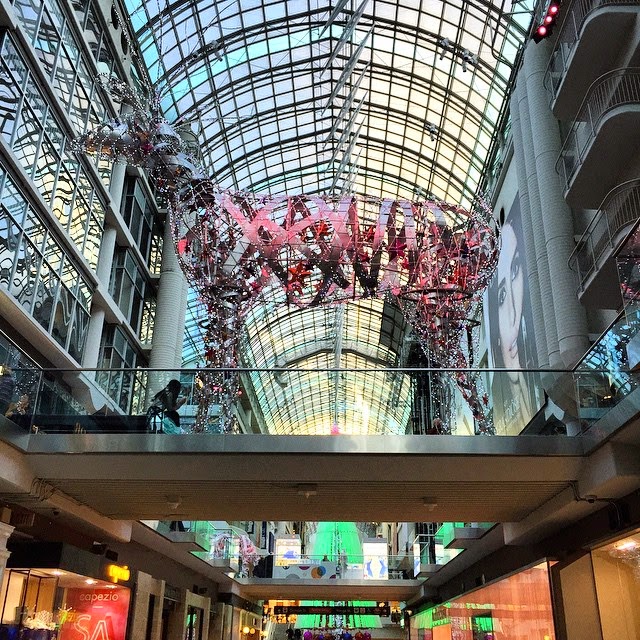 On Sunday morning we got up early, grabbed coffee and headed to the mall to spend a couple hours poking around (since we were more rushed on Saturday evening due to our dinner reservation).  The Christmas decor at the mall is just stunning!  That deer must have been 40 feet tall. 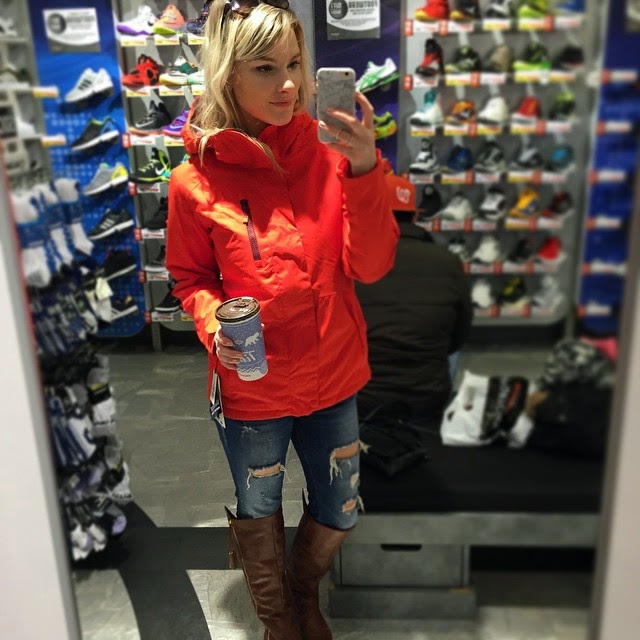 I have been looking for a new jacket for snowboarding for a few weeks now.  I initially saw this one a couple weekends ago and loved it, but wasn’t sure the orange would work.  I decided I wanted a plum-purple and started hunting.  After finding a few options on eBay but not pulling the trigger, we decided to actively look in Toronto.

When I went into Sport Check I saw a pink Burton jacket I had been watching on eBay.  I tried it on, but just wasn’t sold on pink.  There was no purple and I really wanted Burton.  I saw this orange one again (with plum lining) and decided to try it for fun.  I loved it!  I decided to pull the trigger and when I got home, found it matches perfectly with my new board (which I thought was purple/pink but the pink is more orange).  This is the Burton Horizon. 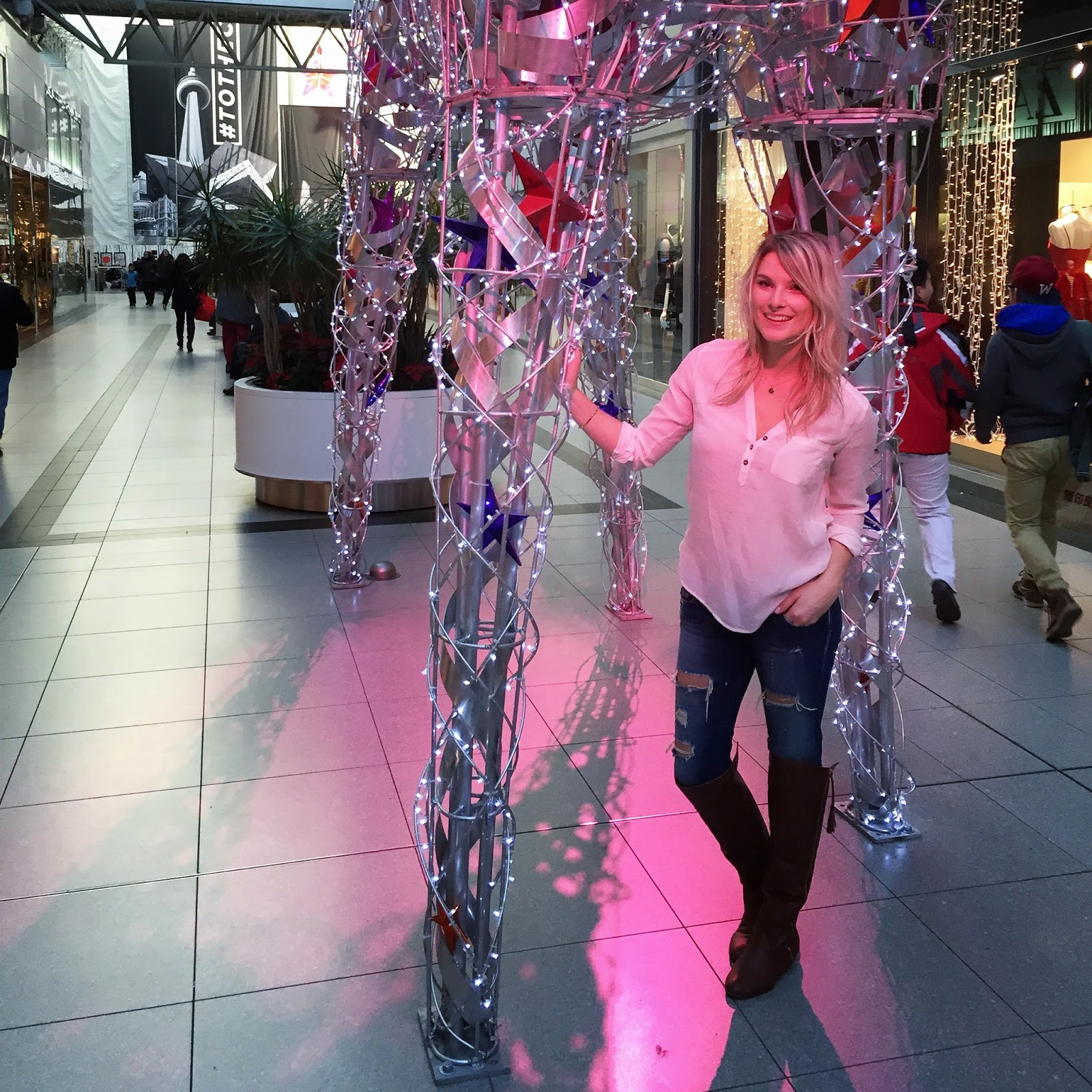 At the Eaton Centre. 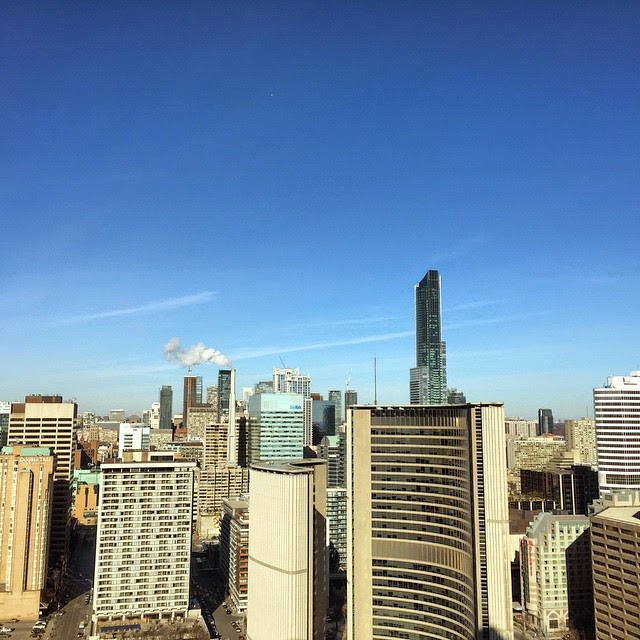 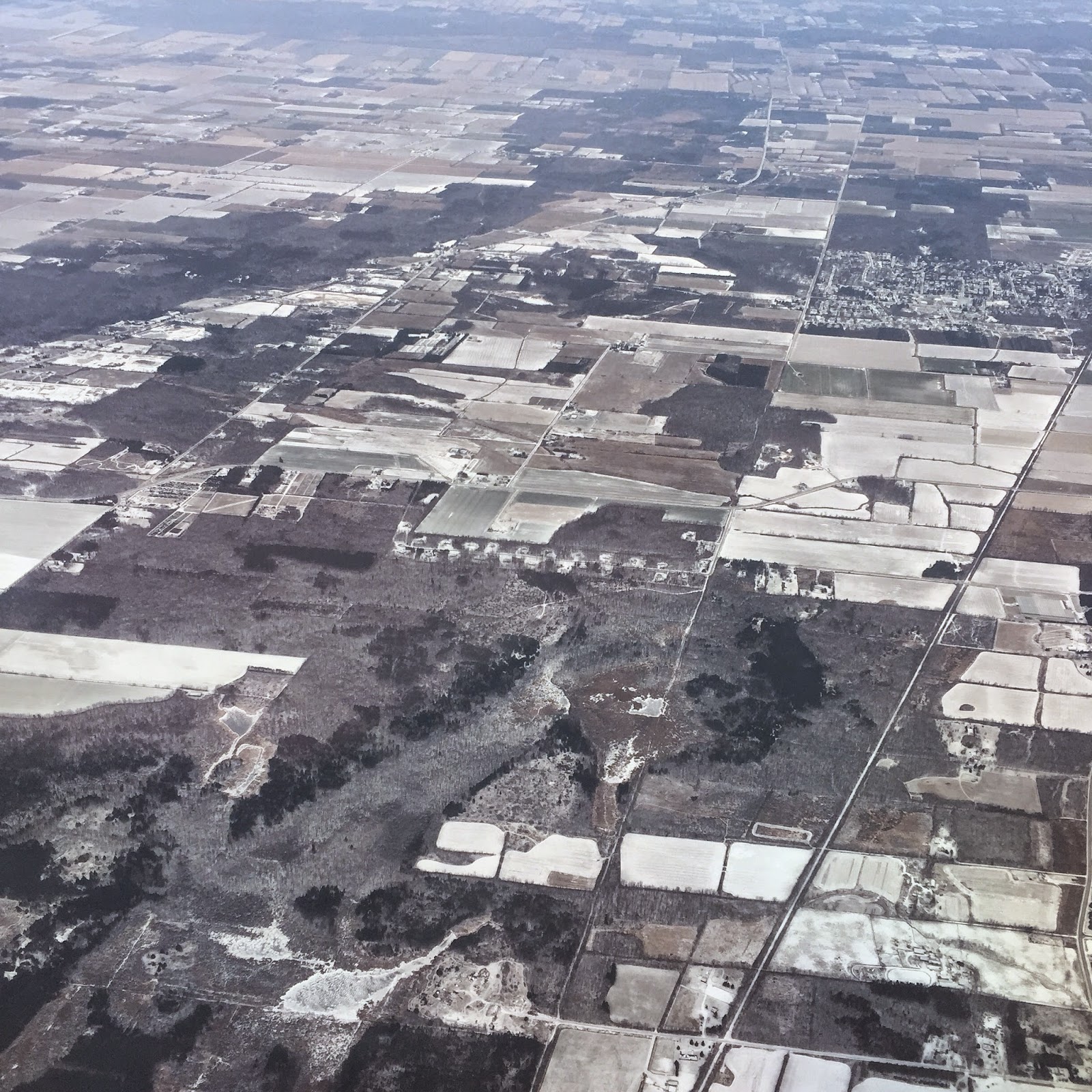 Thanks for reading, hope you had a great weekend!